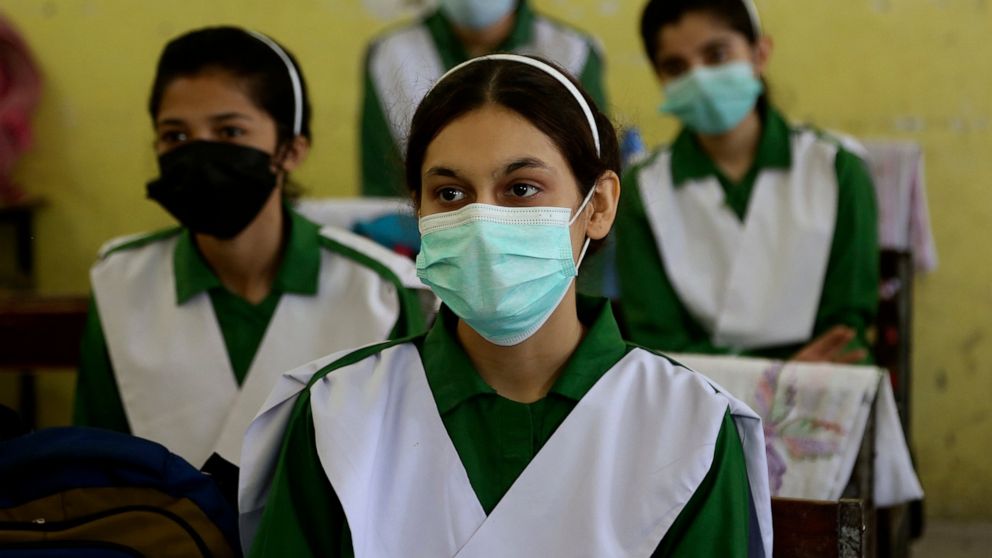 About 1.96 million people passed through U.S. airport security checkpoints on Friday, and 1.90 million did so on Monday, according to the U.S. Transportation Security Administration.

Tuesday was also expected to be busy, as travelers returned home after the Memorial Day weekend. Analysts expect travel to continue rising slowly now that many Americans are vaccinated against COVID-19 and airlines are adding more flights.

MORE ON THE VIRUS OUTBREAK:

HERE’S WHAT ELSE IS HAPPENING:

LONDON — London’s Heathrow Airport has reopened a terminal that was mothballed during the coronavirus pandemic to handle passengers now arriving from high-risk countries. Critics say the action should have been taken sooner.

Britain has barred travelers from a “red list” of 43 coronavirus hotspots including India, Brazil and Turkey. U.K. nationals and residents returning from those countries face a mandatory 10-day quarantine in a hotel. Other travelers coming from “amber list” countries like the United States can do their mandatory 10-day quarantine at home in the U.K.

Critics have complained that red list passengers have been using the same massive airport arrivals hall as travelers from other destinations, though in separate lines, since the hotel quarantines were introduced in February.

Starting Tuesday, red list arrivals will pass through the airport’s Terminal 3, which was closed in April 2020 as international air travel plummeted.

CAMBRIDGE, Mass. — American pharmaceutical company Moderna says it has begun the process to win full U.S. regulatory approval for the use of its COVID-19 vaccine in adults.

Moderna announced Tuesday it has begun a “rolling submission” to the Food and Drug Administration of data from its studies of the two-dose vaccine.

Moderna’s vaccine already has been cleared for emergency use by the FDA and regulators in numerous other countries. So far, more than 124 million doses have been administered in the United States.

Large-scale studies of the shots continued after Moderna’s emergency authorization. The FDA will scrutinize the information to see if the vaccine meets stringent criteria for full licensure.

Last week, Moderna also announced that its vaccine appears safe and effective in kids as young as 12. The company plans to seek emergency authorization for teen use this month.

GENEVA — The World Health Organization has issued an emergency use listing for the COVID-19 vaccine made by Sinovac in adults aged 18 and over, the second such authorization it has granted to a Chinese company.

In a statement Tuesday, the U.N. health agency said data submitted to its experts showed that two doses of the vaccine prevented people from getting symptoms of COVID-19 in about half of those who got the vaccine. WHO said there were few older adults enrolled in the research, so it could not estimate how effective the vaccine was in people over age 60.

WHO’s authorization means the vaccine can be bought by donors and other U.N. agencies for use in poorer countries, including in the U.N.-backed initiative to distribute COVID-19 vaccines globally known as COVAX.

Last month, WHO gave the green light to the COVID-19 vaccine made by Sinopharm. It has also licensed vaccines developed by Pfizer-BioNTech, Johnson & Johnson, Moderna Inc and AstraZeneca.

The COVAX effort has been slowed considerably after its biggest supplier in India said it would not be able to provide any more vaccines until the end of the year.

To date, there is no confirmed deal for Sinovac doses with COVAX.

ALGIERS, Algeria — Algeria partially reopened its skies to flights on Tuesday after a 14-month shutdown to try to keep out the coronavirus.

A first flight of the national carrier Air Algerie took off for Paris on Tuesday and another was expected to land in Algiers, the capital.

Great caution governed the reopening, with limited flights, tests for COVID-19 and a required quarantine. Those heading to Algiers must have a negative test less than 36 hours before boarding, and all passengers must undergo a five-day quarantine in a hotel requisitioned by the state.

A negative test result is required to leave the hotel.

LONDON — Britain’s government said no new coronavirus deaths were reported Tuesday, the first time this has happened since July 2020.

The positive news came amid concern about increasing cases in the U.K. of the coronavirus variant first identified in India, and uncertainty about whether authorities will press ahead with the final stages of easing social restrictions later this month.

As of Tuesday there have been a further 3,165 confirmed COVID-19 cases in the U.K., compared to about 2,500 cases last week. Some parts of northwestern England have seen a steep rise in infections. Officials have said that up to three-quarters of these new cases are the Indian variant, which they say appear to be more transmissible.

Official figures showed no deaths within 28 days of testing positive for the coronavirus were reported Tuesday. The U.K. total death toll stood at 127,782, the highest in Europe.

GENEVA — The European Medicines Agency said it has recommended approving two additional manufacturing and finishing sites for the coronavirus vaccine made by Pfizer and BioNTech.

In a statement on Tuesday, the EU drug regulator said the additional vaccine production and filling sites were at Pfizer’s factory in Puurs, Belgium. The EMA said its decision, based on a review of manufacturing data submitted by BioNTech, is expected to have “a significant and immediate impact” on the supply of the vaccine for the 27 countries in the EU made by Pfizer and BioNTech.

Last month, the EU Commission signed a third contract with Pfizer-BioNTech to obtain an additional 1.8 billion doses of their vaccine from 2021 to 2023. That contract stipulated that vaccine production be based in the EU and that delivery to the EU be guaranteed in 2022. In April, the EU sued AstraZeneca for its failure to deliver on the hundreds of millions of doses Europe had been promised in its contract.

NEW YORK — A play about young Black men trapped on a street corner has positioned itself as the first Broadway show audiences can watch live when the Great White Way restarts.

Antoinette Chinonye Nwandu’s “Pass Over” will begin performances Aug. 4 at the August Wilson Theatre, several weeks before any other show.

Riffing of “Waiting for Godot,” the play is seemingly perfect for a post-COVID-19 Broadway: Just three actors and an intermission-less 85-minute running time.

The play was first staged in 2017 in Chicago and was filmed by Spike Lee. It was most recently produced at Lincoln Center’s off-Broadway theater in 2018 and that cast will make the leap to Broadway.

ISLAMABAD — Pakistani authorities on Tuesday launched a locally processed, filled and packaged Chinese CanSino vaccine by giving it the name of PakVac.

The development comes weeks after China supplied the vaccine in bulk in concentrated form for filling and packaging in Pakistan.

The Chinese concentrate is being processed, sterilized and packed at a health facility in the capital, Islamabad, with a capacity of rolling out three million doses a month.

In a speech at a ceremony, Pakistan’s minister for planning and development, Asad Umar, thanked China for helping Pakistan to locally process, fill and package the vaccine.

The launch comes amid a decline in fatalities and infections from the coronavirus.

LANSING, Mich. — Michigan crossed a threshold in the COVID-19 pandemic Tuesday with a lifting of certain restrictions at outdoor events and inside bars and restaurants.

Read More:  How Did I Get a Urinary Tract Infection and How Can I Treat It?

Masks no longer are required outdoors, and capacity limits are extinguished at outdoor sports events and concerts.

Restaurants and bars can operate indoors at 50% capacity and can stay open past 11 p.m. There’s no limit on the number of people at one table. Full capacity returns on July 1.

Gov. Gretchen Whitmer announced the changes on May 20 as new coronavirus cases were slowing down and more Michigan residents were getting vaccinated against COVID-19.

There were only 445 new cases reported Saturday, the latest figures available because of the Memorial Day holiday.

ROME — Italians may eat and drink indoors at bars and restaurants for the first time in months, and that includes the morning ritual of having an espresso or cappuccino at a local cafe.

Until Tuesday, businesses had to either offer outdoor seating, or serve coffee in takeaway cups, admonishing customers to step away from the bar before sipping or run afoul of virus restrictions.

Rome resident Paolo Leoni enjoyed an espresso at the Toraldo Cafe in the center of Rome. He said that “one coffee gives us the feeling of living serenely again.”

Cafe owner Alessandro Rappini says that seeing the place fill up again after four months “gives me a huge sense of satisfaction.”

Italy began rolling back pandemic restrictions in April as the number of new cases showed signs of steady decline. To date, nearly 35 million people in the country of 60 million residents have received at least one shot of a COVID-19 vaccine.

BERLIN — German authorities are investigating allegations of fraud involving the massive rollout of free coronavirus tests, which are being carried out now in converted cellphone stores, beauticians and art galleries across the country.

Germans have to present a negative test result in order to enter non-essential stores, visit restaurants or bars, or attend small-scale cultural events. The government pays for one free test per person each week, which has led to a proliferation of more than 15,000 businesses offering antigen tests that provide results within 20 minutes.

“There is the suspicion, a very well-founded suspicion after everything I’ve seen, that there’s also been fraud,” Jens Spahn, the country’s health minister, said Tuesday.

The issue has once again raised questions of who is accounting for the German government’s spending splurge in response to the pandemic.

Last year, numerous applicants seeking government support for businesses affected by the lockdown were found to have made fraudulent claims, leading to a tightening of rules and severe delays in payments as further checks were conducted.

This story has been corrected to say that the World Health Organization granted emergency use authorization, not emergence use.