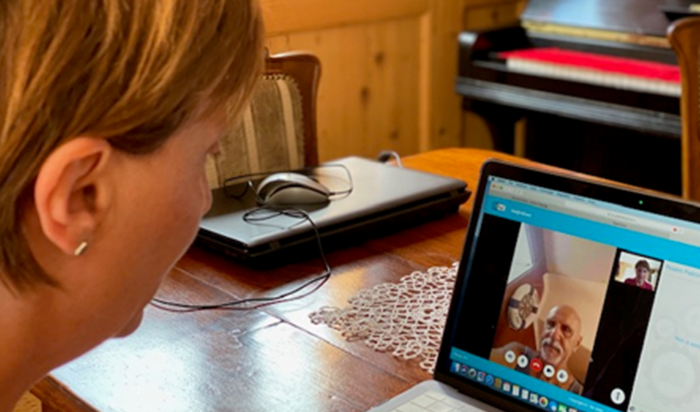 When the COVID-19 emergency struck Italy, Lombardy was one of the hardest hit regions.

All inpatient admissions in the area for non-COVID patients were stopped in a bid to prevent the contagion spreading.

But this caused a potentially dangerous dilemma for the region’s Foundation IRCCS Carlo Besta Neurological Institute, which hosts around 6,000 inpatient and 44,000 outpatient visits each year.

“We were in a situation where patients with chronic neurological diseases were suddenly without care. This clearly was a risk for their health in the short and long-term,” says Dr Davide Pareyson, head of the rare neurodegenerative and neurometabolic diseases unit at the Institute. “We needed to find a rapid situation to ensure patient care, so we thought of developing synchronous televisits.”

Before the pandemic, the institute was already at the first stage of developing telehealth options, funded by the Ministry of Health, and had discussed issues related to privacy, safety, consent, responsibility and clinical rapport. The Lombardy region had also approved telemedicine services for child neurology via Skype or similar tools.

However, a major barrier was that telemedicine had not been formally recognised in Italy. Certified platforms were expensive and not immediately available, and a clear procedure was needed to write and deliver clinical records to patients.

The Institute sought and obtained approval from the Ministry of Health for its telehealth plans and formed a working group with its chief information officer Francesca De Giorgi and representatives specialising in rare neurological diseases, Parkinson’s Disease, multiple sclerosis and child neurology.

Using an existing business agreement with video-conferencing platform for remote secure connection, the Institute integrated a structured workflow and began a two-week pilot at clinics, before rolling out the plan more widely.

Between 10 March and 10 June, the service delivered more than 1,540 telemedicine services, of which 694 were neurological visits.

“We were able to take care of our patients in spite of the pandemic,” concludes Pareyson. The Institute now plans to launch a certified telehealth platform this month.

The COVID-19 emergency has had two main impacts on telehealth in Italy, according to Paolo Locatelli, scientific officer at the Observatory on Digital Innovation in Healthcare.

Telemedicine had not been formally recognised in Italy before the pandemic and a lack of regulation relating to tariffs and context of applications was one of the main barriers to realising projects.

However, during the emergency, some regions including Venetia, Tuscany, Aosta Valley and Piedmont, took action to overcome this barrier to regulation by defining the ways to use digital services. The Ministry of Health also published guidelines that indicate telemedicine as a privileged modality for medical-consultations.

“We think this will help the faster spread of telemedicine,” says Locatelli.

Another main trend has been a change in physicians’ perception of digital tools. The Observatory’s research found that 75% of physicians believed telemedicine had a determinant role during the COVID emergency and more than 50% believed it could increase the processes and efficiency of care.

“Our Observatory has monitored digital health in Italy over the last 14 years and the perception of the usefulness of these tools was previously one of the barriers. But after the experience of the emergency we’ve seen that this barrier is not so strong,” Locatelli says.

Read More:  What Do Women Want? For Men to Get Covid Vaccines.

A patient-centric approach to ostomy care

One example of a successful telemedicine project launched during the COVID emergency is the Smart Ostomy Support (SOS) remote care platform, created by the Federation of Associations of Incontinents and Ostomates (FAIS).

The patient-centric app launched at the Fondazione Poliambulanza in Brescia and is now due to be piloted at the Instituto Nationale dei Tumori in Naples and Aulss 6 Euganea in Venetia, before being rolled out to other hospitals.

SOS uses gamification to educate patients and medical staff about ostomy care. For example, it allows paediatric patients to look after a digital Tamagotchi pet before and after their ostomy to learn self-care skills.

“Before COVID I felt telemedicine was a nice to have – now it’s something more. You cannot imagine a healthcare service without it now,” he concludes.