She’s the face of this year’s VHI Women’s Mini Marathon, now Doireann Garrihy is ready to share her top tips to get you ready to run 10km.

Yes, you…it can be done! In fact Doireann says there are just three steps you need to follow to get you moving.

“My advice for someone starting out would be, first get yourself a buddy.

“I’m lucky, I live with Ailbhe, (Doireann’s sister) and if one of us isn’t feeling it the other will always go, ‘Come one, get your runners on, we’re going out’.

“Second, take it at your own pace, don’t force yourself.

“Don’t say to yourself, ‘I’m going to run 5km straight this week, no matter what’, get an app that will calculate how to do it and help you work up to it, there’s loads of them out them.

“And thirdly, always have music to listen to when you go out running.

“It will spur you on and also it will make sure you can’t hear yourself breathing.

“If I run and I have no music and can hear myself panting, I feel like I’m exhausted, I’m like, ‘I’m too tired’.

“I like to listen to a bit of Beyonce or some club music, anything dancey that gets you going and gets you moving.” 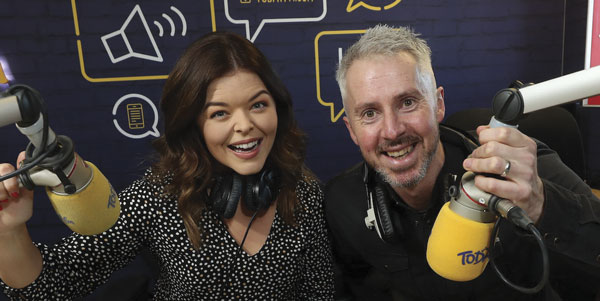 She’ll be running the race with mum Clare and sisters Ailbhe and Aoibhinn.

“Last year Aoibhinn was our number one cheerleader, she was ready to pop so she couldn’t run herself but she did gentle training while she was pregnant, she kept fit, so she’s going to go for it this year.

“There will be some healthy sister competitiveness going on!”

And Doireann, who is running on behalf of the Vincent de Paul charity, knows who will be in it to win it…

“Definitely Aoibhinn! She’s a great runner and she’s the most competitive sister, and because she’s coming back, she’ll be coming back to win it.”

Doireann Garrihy is working towards her dream job — “working in national radio full time so hopefully that happens this year or next year. It’s all about putting myself in a position to take the job” — after recent stints on Today FM, co-hosting with Declan Pierce weekdays and solo presenting at the weekend, and has another series of her comedy show in the pipeline.

“I hope to do more of the Doireann Project stuff. RTE want to go again, they want another series, and I want it to be bigger and better than the last so I need to get writing, I do original sketches as well as the impressions.”

So far, Doireann hasn’t offended any of her famous targets, and says there are some things she would never make fun of.

“Anyone I’ve met has been so, so lovely, they’ve laughed it off. My impressions aren’t below the belt, I only do stuff the person actually does.

“I bounce stuff off my sisters and my mam as well, I’ll ask for their opinion, and sometimes I have recorded stuff and gone, ‘Oh God…’

“I wouldn’t ever be insulting or crude, but there are times I’ve watched it back and gone, ‘Actually, maybe not’, and if they seem like they’re going through a hard time, I won’t do it.”