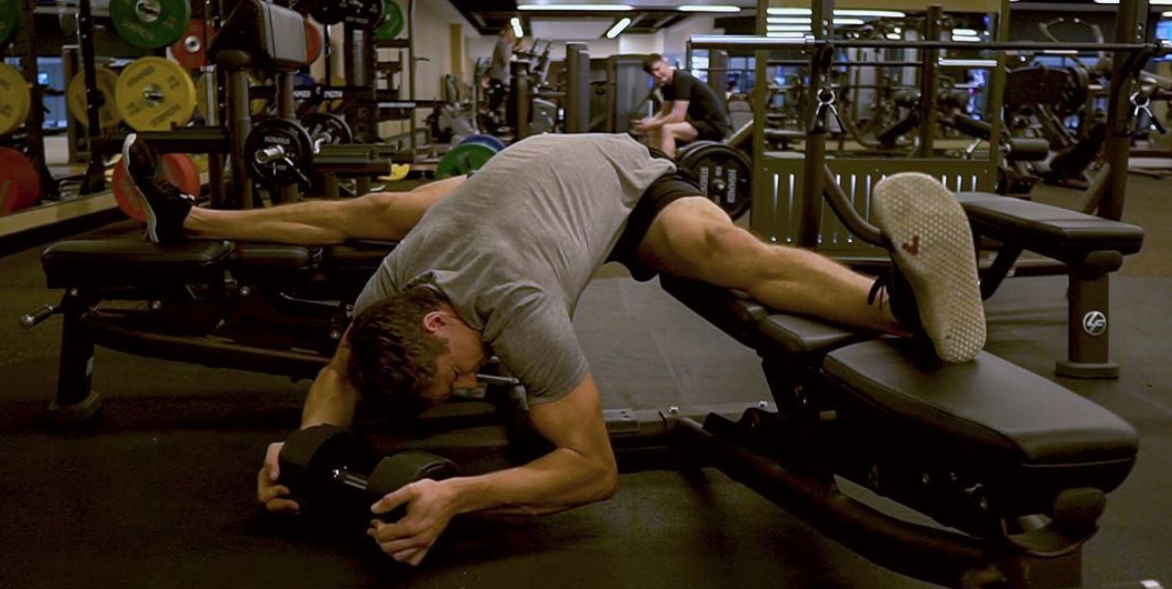 Practicing calisthenics for nearly a decade means learning a lot along the way, and this certified pro is spilling his secrets. In a recent video, Tom Merrick of the YouTube channel Bodyweight Warrior celebrated eight years of crushing calisthenics by sharing the lessons he’s learned along the way.

Merrick says his success boils down to consistency, perfecting the basics, and valuing guidance. But this bodyweight wisdom was hard earned.

Merrick says that when he first started training, he was a true gym bro, chugging pre-workout and protein shakes, putting emphasis on arm gains.

“When I first got into training, looks was the first focus,” he says in the video. “I was your standard gym bro guy. I didn’t really have any interests outside of that.”

But he says his lifestyle outside of working out wasn’t exactly supporting his training habits. Eventually, Merrick had what he calls a “revolution” after a bout with mono. He says he lost almost three years of “gains” in a single month, and had to ease back into training after his illness. That’s when Merrick discovered bodyweight training.

“I thought, ‘Bodyweight training is easy, right? So easy. The easiest,’” he says with a laugh. “Little did I know where we’d end up.”

He adds, “I quickly realized this is harder than it seems, as I’m sure many of you are aware. I was also really inflexible. I couldn’t actually touch my toes at this point.”

So along with basic bodyweight exercises like pull-ups and squats, Merrick started stretching every night. Eventually, that lead him to the skills portion of calisthenics, like the handstands Merrick is known for perfecting.

Read More:  When in depression what to do

“This is ultimately where things started to get really hard,” he says. “And, you know what, I joined the calisthenics dark side.”

Merrick says at this point, he was training six days a week for two hours a day. Though he made good skills progress, he found he was “doing too much,” which lead to an injury. Merrick experienced golfer’s elbow, a type of tendonitis, and ulnar nerve compression, which he describes as seemingly minuscule injuries that impact virtually all parts of upper body training.

“[Tendonitis] just doesn’t want to go away. It is a stubborn bastard basically,” he says. “It felt like the first time [with mono] where I was just going to lose all my progress because of some silly incident.”

Ultimately, he had to pull back from training for about nine whole months. To supplement, Merrick decided to double down on flexibility training. After nine months of rest and flexibility gains, Merrick “did something stupid”—a flag that tore his supraspintus. This put him out for another three months.

“I realized that I just hadn’t spent enough time on the basics,” he says. “If there’s one thing I want to share with people, it’s not to underestimate the basics and to spend time getting strong.”

So Merrick went back to basics, focusing on the bodyweight exercises rather than impressive skills. He calls it the best training decision he’s ever made.

“If you do not have a good base in which to build the rest of your skills on, those skills are not going to reach their highest peak,” he says.

Read More:  Bloated stomach remedies: Drink this easy drink to get rid of a bloated tummy after eating

After perfecting the basics, Merrick focused on perfecting a one-handed handstand held for ten seconds, a skill he estimated would take him six months to perfect. It actually took him two years. To reach that specific personal goal and several goals along the way, Merrick hired a coach, saying there is a “benefit to just paying someone who knows more than you.” He says coaches tend to spot places to improve and push you to step outside of your comfort zone.

“Sometimes it’s just useful to have somebody who isn’t yourself looking at things and giving you stuff to do because they’ll probably spot something that you haven’t necessarily thought about,” he says.

In preparation for his eight year training anniversary, Merrick says he recently revisited an old video from five years ago and found that many of the fitness goals then are the same goals he has now. And he says that simple realization defines much of his experience with the calisthenics world.

“Calisthenics is hard. Mobility is hard. Handstands are hard,” he says. “It’s one of those things that is a long time practice, but not something I necessarily realized then.”

Watch Merrick’s full video below. To get started on your own calisthenics journey, check out these workout tips.