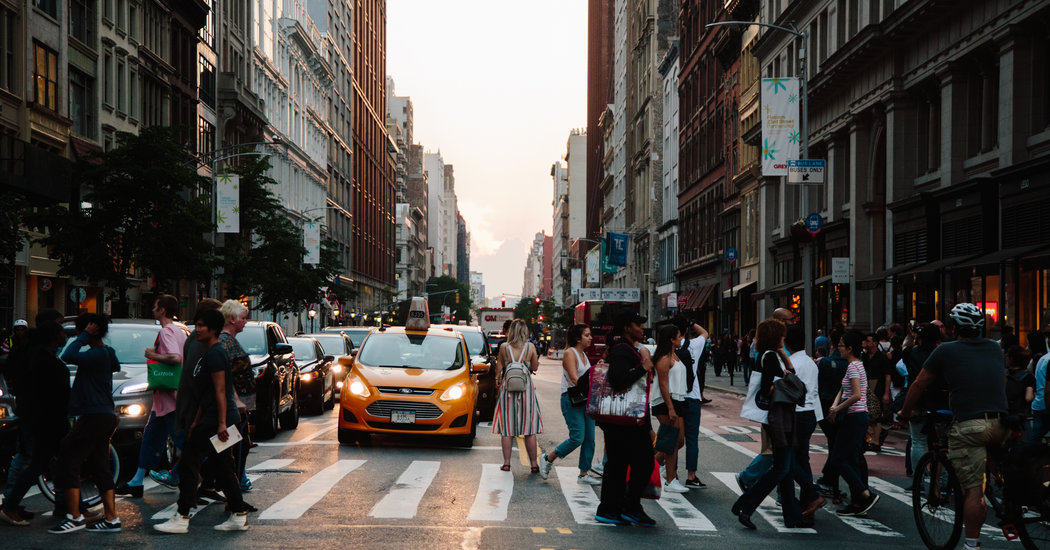 [What you need to know to start the day: Get New York Today in your inbox.]

The number of traffic deaths in New York City dropped in 2018 to the lowest level in more than a century, a sign of progress for Mayor Bill de Blasio’s plan to eliminate fatalities on the city’s streets.

The news, however, was not all promising: Although overall deaths declined, the number of pedestrians killed in traffic increased last year, city officials said on Tuesday.

Mr. de Blasio has implemented a number of safety improvements in his aim to eliminate all traffic deaths by 2024, a program he named Vision Zero after a Swedish plan.

The total number of people killed in traffic crashes in New York City fell to 200 last year, down from 222 deaths in 2017 and the lowest level since the city began tracking such deaths in 1910, according to preliminary data from the city.

The reduction is part of a five-year decline from 299 deaths in 2013, the year before Vision Zero began and the speed limit on most streets was lowered to 25 miles per hour.

But pedestrian deaths, which account for the largest share of traffic fatalities, increased last year to 114, from 107 in 2017 — a troubling sign that the city’s streets remain dangerous for many New Yorkers.

Mr. de Blasio, a Democrat who began his second term a year ago, called the rise in pedestrian deaths disappointing. He said the city would do more to redesign streets to make them safer and to enforce laws requiring vehicles to yield to pedestrians.

“Drivers haven’t taken their responsibility to yield very seriously,” Mr. de Blasio said. “There has been a lot of enforcement, and there will be more.”

Nationally, more than 37,000 people died in traffic crashes in 2017, according to federal transportation data that is not available yet for 2018. The number of traffic fatalities in the United States fell by about 2 percent in 2017, but that followed increases in deaths in 2016 and 2015.

In New York, safety advocates have pressed Mr. de Blasio to move faster to improve streets. Marco Conner, deputy director of Transportation Alternatives, an advocacy group, said there were still too many deaths and injuries.

“It’s an achievement, and it should be celebrated,” Mr. Conner said of the drop last year. “But I think the big question is: Why aren’t we doing more against the enormity of the epidemic? We’re only really taking baby steps.”

The people who lost their lives represent a cross section of New Yorkers: A 5-year-old girl, Abigail Blumenstein, and a 1-year-old boy, Joshua Lew, were killed by a driver in Brooklyn while crossing the street with their mothers; an 89-year-old woman, Beatrice Kahn, was hit by a car in the Bronx; and a 9-year-old boy, Giovanni Ampuero, was struck by a driver who fled the scene in Queens.

Read More:  What Our Autism Friendly City Looks Like

In August, a 23-year-old Australian woman died after she was hit by a garbage truck while riding a bicycle near Central Park. She was cut off by a livery cab that entered a bike lane. Her death led to calls for better bike infrastructure, such as protected lanes.

The city’s Vision Zero program faced a major hurdle last summer when state lawmakers failed to reauthorize speed cameras posted at 140 school zones — a policy the city said reduced speeding during school hours by as much as 63 percent. Gov. Andrew M. Cuomo and the City Council speaker, Corey Johnson, intervened to keep the cameras on.

Mr. Johnson recently won the “Vision Zero Hero of the Year” award from Streetsblog, a website that reports on street safety, besting Mr. de Blasio for the top honor. The website praised Mr. Johnson for his support of speed cameras and congestion pricing, a proposal to collect tolls from cars entering Manhattan that Mr. de Blasio has resisted.

Mr. Conner, of Transportation Alternatives, said Mr. Johnson had become a strong advocate for prioritizing street safety above cars — a leadership role that Mr. de Blasio had failed to achieve.

“The mayor is still tied up in somewhat of a windshield perspective,” Mr. Conner said in reference to Mr. de Blasio’s reliance on cars to travel across the city.

Mr. de Blasio dismissed the criticism that Mr. Johnson had taken the lead on Vision Zero, calling the safety program one of the “central missions” of his administration.