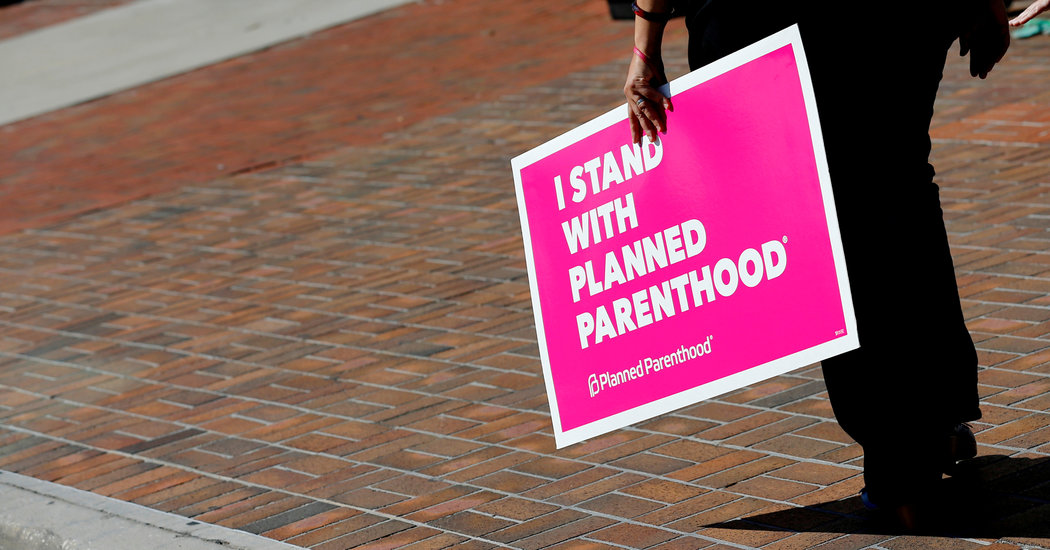 The Trump administration announced on Friday that it will bar organizations that provide abortion referrals from receiving federal family planning money, a step that could strip millions of dollars from Planned Parenthood and direct it toward religiously-based, anti-abortion groups.

The new federal rule is almost certain to be challenged in court. Clinics will be able to talk to patients about abortion, but not where they can get one. And clinics will no longer have to counsel women on all reproductive options, including abortion, a change that will make anti-abortion providers eligible for funding.

The rule, which has been expected for months, is the most recent step by the Trump administration to shift the direction of federal health programs in a conservative direction. The administration has expanded the ability of employers to claim religious or moral objections to the Affordable Care Act’s requirement that they offer employees insurance coverage for contraception. It has channeled funding for teen pregnancy prevention programs and family planning grants into programs that emphasize sexual abstinence over contraception.

Some of these changes are being challenged in lawsuits by groups that support reproductive rights, but the new policies have broad support among evangelicals, who are a big part of the president’s political base.

The rule announced on Friday is not a wholesale defunding of Planned Parenthood, a long-held goal of conservatives. Organizations receiving money through the federal family planning program, called Title X, will still be able to perform abortions but will have to do so in a separate facility from their other operations and adhere to the new requirement that they not refer patients to it.

Organizations that receive federal funds have already been prohibited for years from using that money to finance abortion services. The new rule goes a step further by ordering them to keep separate books for their abortion operations.

Many women’s organizations said the new requirements will interfere with health providers’ responsibilities to fully counsel patients about reproductive health.

“Trump’s domestic gag rule harms women in more ways than one,” Stephanie Schriock, president of EMILY’S List, said in a statement. “It effectively dismantles Title X, forces doctors to lie and forbids them from referring their patients for abortion, and prevents women from being able to access Planned Parenthood’s services.”

Anti-abortion organizations heralded the regulation as a long-sought victory. “The finalized ‘protect life rule’ draws a bright line between abortion and family planning programs,” Tony Perkins, president of the Family Research Council, said in a statement, adding that the rule will loosen Planned Parenthood’s “hold on tens of millions of tax dollars.”

Title X provides $ 286 million in funding for programs that provide services like birth control, screening for breast cancer and cervical cancer and screening and treatment for sexually transmitted diseases. These programs serve about 4 million patients each year, many of them poor, at more than 4,000 clinics. About 40 percent of those clinics are operated by Planned Parenthood, which receives close to $ 60 million through the family planning program each year.

She added: “Patients expect their doctors to speak honestly with them, to answer their questions, to help them in their time of need. Imagine if the Trump administration prevented doctors from talking to our patients with diabetes about insulin. It would never happen. Reproductive health care should be no different.”

The new rule is not the first time a Republican administration has tried to withhold family planning funds from organizations that provide abortion counseling or services. In 1988, President Ronald Reagan barred clinics from not only referring patients for abortions, but also from counseling them about abortions.

That rule was challenged all the way to the Supreme Court, which upheld it in 1991, during the administration of President George H.W. Bush. But the Bush administration did not implement it and in 1993 Bill Clinton was sworn in as president and eliminated the rule.

Conservative lawmakers hailed the new rule as a long overdue move back toward the Reagan policy, and some were especially pleased by the prospect that anti-abortion health providers could now be eligible for federal family planning funds.

But several medical organizations predicted that the new rule would ultimately leave large numbers of patients, especially low-income and minority women, without access to basic care.

Dr. Niva Lubin-Johnson, president of the National Medical Association, which represents African-American physicians and their patients, said that if Planned Parenthood loses the funding, other providers supported by the program would have to increase their caseloads by an average of 70 percent to care for the 1.6 million people who currently receive such services through Planned Parenthood.

“Many providers have already said they would be unable to fill this gap,” Dr. Lubin-Johnson said. “This rule will have dire and disproportionate consequences for African-American patients, who make up 22 percent of people who access health care through Title X.”