2021 is the 20th anniversary of the University of Michigan Center for Value-Based Insurance Design (V-BID). On March 10th, V-BID held its annual Summit, celebrating the Center’s 20 years of innovation and scholarship. The Center is led by Dr. Mark Fendrick, and has an active and innovative advisory board. [Note: I may be biased as a University of Michigan graduate of both the School of Public Health and Rackham School of Graduate Studies in Economics].

Some of the most important areas of the Center’s impact include initiatives addressing low-value care, waste in U.S. health care, patient assistance programs, Medicare Advantage plans, and the bundling of proven high-value preventive services into the Affordable Care Act.

These services are enumerated in Section 2713 in the ACA, prompting Dr. Kavita Patel to assert in the first panel of the day that, “2713 is my favorite number.”

As I follow her on Twitter, I saw that Dr. Patel tweeted to promote the Summit, “What is v-bid you ask? The coolest thing in health policy in the 21st century!! It’s why you can get a mammogram without a copay.”

Amitabh Chandra gave the opening context-setting talk about the effects of health care cost-sharing on patients-as-consumers. This was drawn from his latest paper published in NBER, co-written with Evan Flack and Ziad Obermeyer. Their research mines data from the Medicare Part D drug benefit program to identify several facts about consumer-facing drug costs, behavior change in consumption/use, and resulting patient mortality:

In the case of Medicare Part D, the drug benefit, Chandra said, “If you’re sick enough to fall into the donut hole, you may have higher mortality.” Small increases in cost-sharing can result in people cutting back death-preventing medicines. 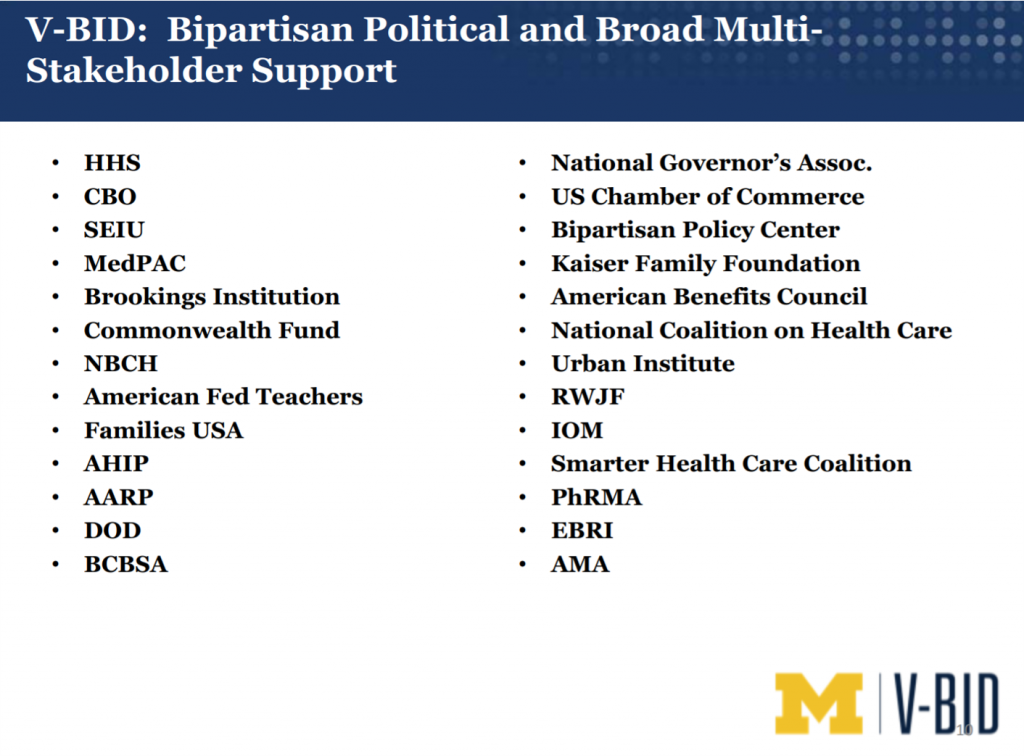 After Chandra discussed the implications of this research, one of the first studies to connect the dots between value-based design and mortality, the remainder of the day featured panel discussions among different stakeholder groups sharing their learnings and best practices deploying VBID among health plans, providers, consumer groups, and manufacturers (pharma, biotech, and life science companies).

Speaking of design, this Summit was indeed well-designed by spotlighting pragmatic representatives from these various stakeholder groups. A previous V-BID session included the slide shown here which illustrates that the concept of value-based insurance design has garnered broad multi-stakeholder support on a bipartisan basis: across health plans and industry groups who fiercely compete for resources and advocacy time on Capitol Hill — from AHIP on the health insurance side to PhRMA extolling the virtues of the bio-pharmaceutical industry, to the unions in the SEIU and American Federation of Teachers to the National Governors Association.

At the end of this day, something Muna Bhanji, an advisor to biopharmaceutical developers who spent over 30 years of her career with Merck, noted: no advances toward value-based care will happen without a sense of partnership, requiring aligned incentives across the health/care ecosystem. 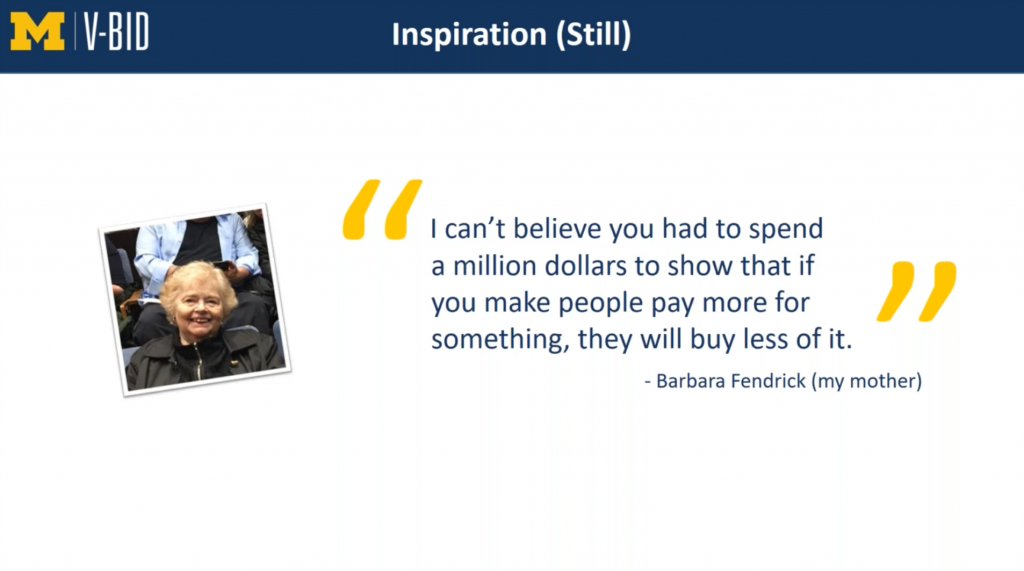 Health Populi’s Hot Points:  Perhaps the most elegant and crystal-clear insight came from Mark Fendrick’s mother, Barbara, who once said to him,

“I can’t believe you had to spend a million dollars to show that if you make people pay more for something, they will buy less of it.”

Out of the mouths of Mom’s, right?!

Dr. Fendrick was part of a team that wrote one of the first research articles on the effects of increasing patient cost sharing on health disparities — published in 2008 in the Journal of General Internal Medicine.

Dr. Fendrick and the team mined a database of 6 million enrollees in employer-sponsored health insurance to find that patients in low-income areas were more sensitive to copayment changes than people in high or middle-income geographies. 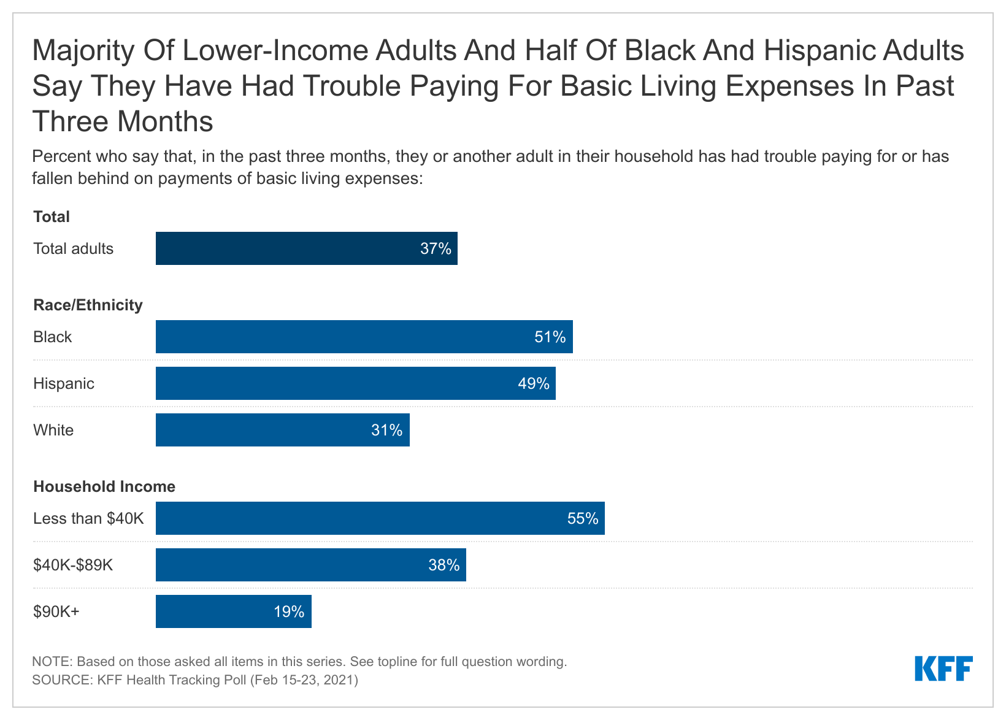 To that point, consider the March 2021 Kaiser Family Foundation Health Tracking Poll which learned that over one in three people in the U.S. have struggled to pay for living expenses since December 2020, a year into the COVID-19 pandemic.

Some 37% of Americans told KFF that someone in their household had had trouble paying basic living expenses over the previous three months: 1 in 4 fell behind on credit card bills, 1 in 6 had trouble paying for food (the growing challenge of food security in the pandemic), and 16% faced issues paying medical bills or affording health insurance coverage.

The last bar chart details the study findings by demographic, illustrating that many more Black and Hispanic people faced trouble paying for basic living expenses than White people, and most of those with annual household incomes under $ 40,000.

In addition to the importance of cross-industry collaboration to effectively move to value-based care, the other key theme coming out of the U-M Summit was health equity. A major motivation to get to VBID is that out-of-pocket costs are rising for patient-consumers, and these hit lower-income people harder than mid-to-higher income folks.

Read More:  How to use insulin plant for diabetes

As I continue to ponder my own learnings from this important event, in retrospect, the timing of the consumer panel was uncanny — during this session which ran from 2 to 245 pm Eastern time, John Rother, health policy expert best-known for his leadership at AARP, joyfully interrupted and commented that the American Rescue Act had made its final passage through the House of Representatives, with provisions to bolster mainstream Americans’ financial wellness.