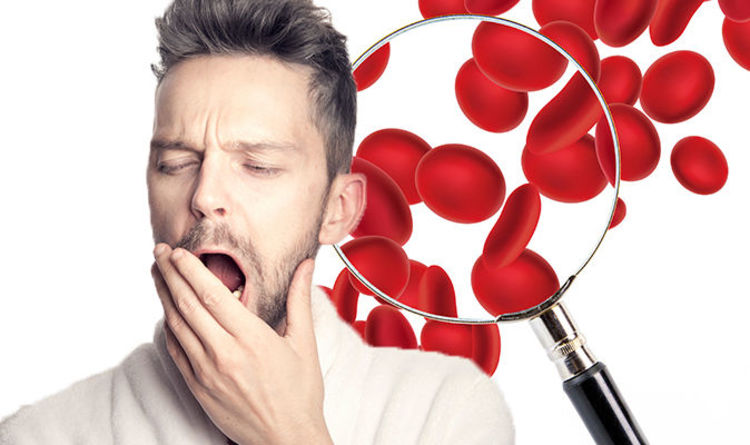 Vitamin B12 is vital in keeping the nervous system healthy and in the production of red blood cells.

Vitamin B12 deficiency is when the body is lacking in B12, causing it to produce abnormally large red blood cells that can’t function properly.

The medical term for this is ‘megaloblastic anaemia’.

The symptoms of vitamin B12 deficiency are wide-ranging, and can include extreme tiredness, lack of energy, and also a pale, yellow tinge to the skin.

If you experience symptoms of B12 deficiency, see a GP, as some problems can be permanent if left untreated.

“It’s important for vitamin B12 anaemia to be diagnosed and treated as soon as possible,” said the NHS.

“Although many of the symptoms improve with treatment, some problems caused by the condition can be irreversible if left untreated.”

“The longer the condition goes untreated, the higher the chance of permanent damage.”

Other problems associated with vitamin B12 deficiency include pins and needles, mouth ulcers and a sore red tongue.

Muscle weakness, disturbed vision, psychological problems and problems with memory, understanding and judgement are also problems associated with the condition.

Symptoms usually develop gradually, but can worsen if the condition goes untreated.

Although uncommon, vitamin B12 deficiency can lead to problems with the nervous system, temporary infertility, heart conditions and pregnancy complications.

Some complications improve with appropriate treatment, but others – such as problems with the nervous system – can be permanent.

The most common cause of vitamin B12 deficiency is pernicious anaemia.

Pernicious anaemia is an autoimmune condition that affects the stomach, causing the immune system to attack the stomach’s cells.

Read More:  This Is Why Pancreatic Cancer Is So Hard to Treat

This prevent the cells in the stomach from being able to absorb vitamin B12.

Some people can develop vitamin B12 deficiency as a result of not getting enough vitamin B12 from their diet.

Treatment for vitamin B12 deficiency includes injections of the vitamin and tablets.

If the deficiency is diet-related, it can be treated by eating more B12-rich foods.