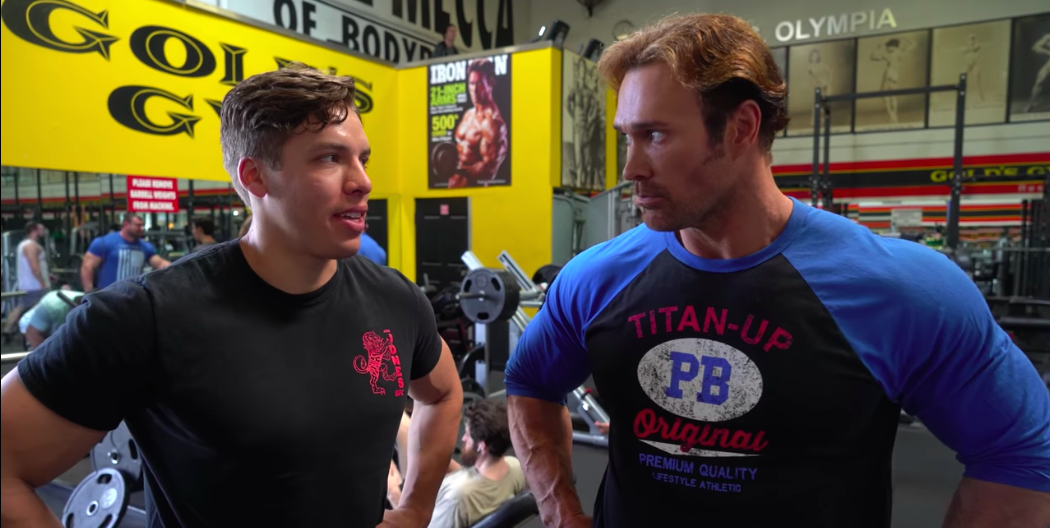 As the son of the Austrian Oak himself, Arnold Schwarzenegger, Joseph Baena is used to having an absolute powerhouse as a gym buddy; he works out with his dad all the time and calls him “the best training partner in the world.” The young actor also got his pump on with bodybuilder Sergio Oliva Jr., the son of his dad’s Mr. Olympia rival.

The pair start off slow, while O’Hearn explains his “less is more” approach to warmups: “You’re not training for a year, you’re training for a lifetime,” he says. “I know a lot of guys who go in and do 20 or 30 reps, and they’ll do 4 or 5 sets, and then they’re warmed up… I’ll do 1 or 2, maybe 5 reps on a warmup and really take it easy.”

O’Hearn also points out something that he learned while training in his forties: he spends more time on recovery between sets. “You youngsters that can recover, do what [Baena] is doing right now,” he says, “look at the time in between sets. Boom, boom, boom.”

Then, the muscle icon takes Baena through some kickbacks for the triceps, then flips the expected arm day script and finishes with some size-building moves. “They’re young, and the one thing they can do right now is shock the body,” he says. “You don’t have to be so locked into the format of what everybody says you need to do. Change that stuff up.”

At the end of the arm workout, Baena admits he’s feeling a different kind of burn. “I’m used to high intensity, just dripping, going all out, balls to the wall, but this is a lot more concentrated,” he says. “I feel like I got just as much damage, though!”