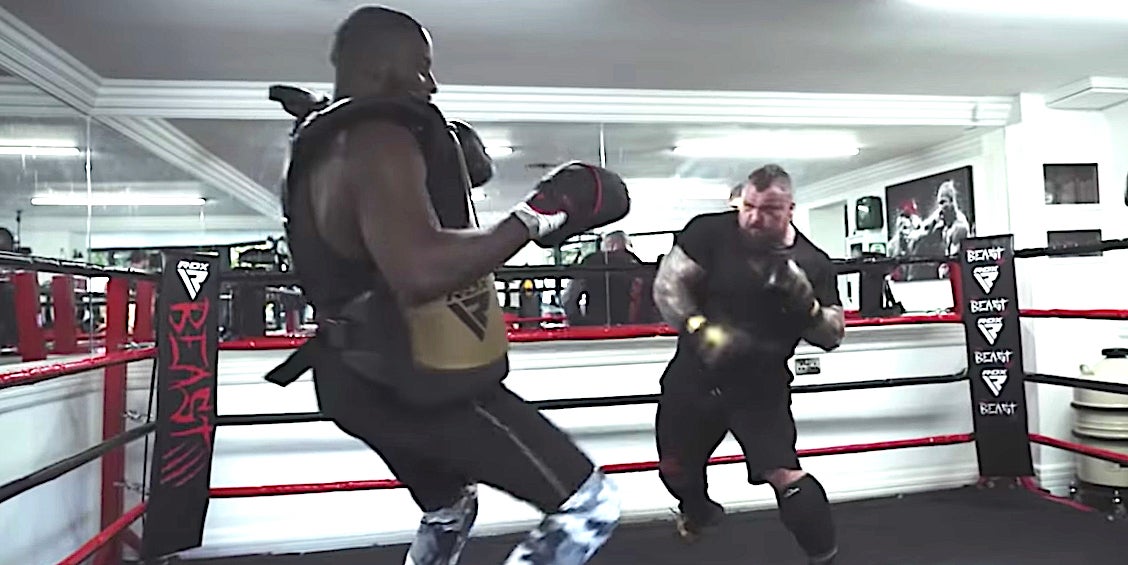 In recent weeks, former ‘World’s Strongest Man’ Eddie Hall has shown off his formidable strength in the ring, often against less-than-formidable opponents such as bodybuilder an fitness model Ryan Terry and retired Olympic gymnast Nile Wilson. In his latest video, Hall decided to test his skills against someone far more accustomed to taking—and dishing out—a punch: WBO champion Lawrence Okolie, who has held the “cruiserweight” title since March 2021.

After exchanging some brief pleasantries, the two men get down to business, heading into the ring for a light training session. Okolie starts by putting Hall through some mobility and footwork drills, with Hall moving around the perimeter of the ring as Okolie repeatedly instructs him to keep his hands up. Even a boxer of Okolie’s stature, however, isn’t above wearing a body bag in the ring with the 6’3” 355-pound strongman. As he puts it, “Without a body bag, you’d really be feeling these shots. Those are ones you don’t take, you run,” he says.

A minute later, Hall lands a series of hard blows to Okolie’s chest, after which Okolie jokes, “You know I’m not actually Thor.”

To his credit, Okolie hangs in there, takes his shots (mostly) without flinching, and a few minutes later the workout is over. It’s refreshing to see Okolie, like so many before him, admit to feeling slightly intimidated by the magnitude of Hall’s size and power. “It’s scary, bro. I’m trying to soak it and stay there, but my body’s like no,” he says. “I know the camera’s rolling and I want to stay there.”

Watch the video above to see the rest of Okolie and Hall’s sparring session, including his insight into Hall’s upcoming fight with Hafthor Bjornsson later this year.