The COVID-19 pandemic accelerated a whole lot of digital transformation for people staying home. For digital natives, that wasn’t such an exogenous shock. 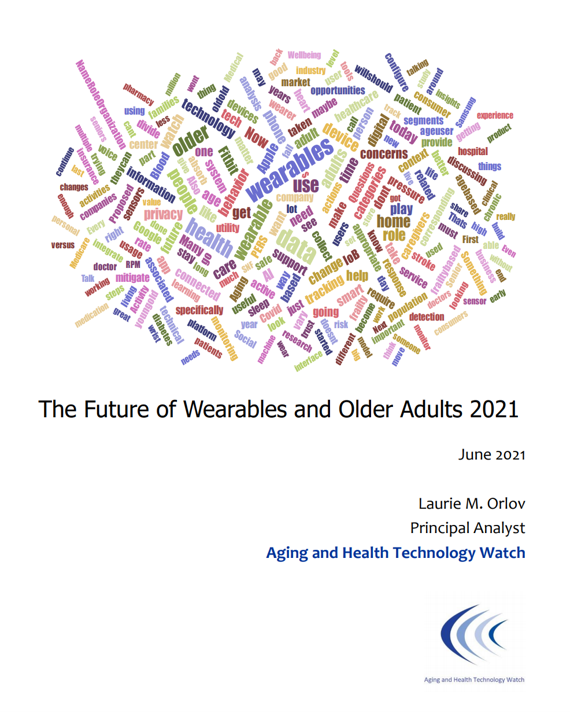 For older people who are digital immigrants, they will remember their initial Zoom get-together’s with much-missed family, ordering groceries online in the first ecommerce purchase, and using telemedicine for the first time as a digital health front-door.

Laurie Orlov,  tech industry veteran, writer, speaker and elder care advocate, is the founder of the encyclopedic Aging and Health Technology Watch website. She takes this propitious moment to assess The Future of Wearables and Older Adult in a new report.

The forecast is an insightful primer on wearable tech’s role in healthy aging and healthcare at home especially useful for technology developers, investors and funds that focus on consumer and medical wearables, healthcare providers and insurers, senior living and real estate, and the growing retail health ecosystem stakeholders who both channel the technology to health consumers as well as depend on the data generated by the devices.

Those devices are multiplying in type and complexity; they include: 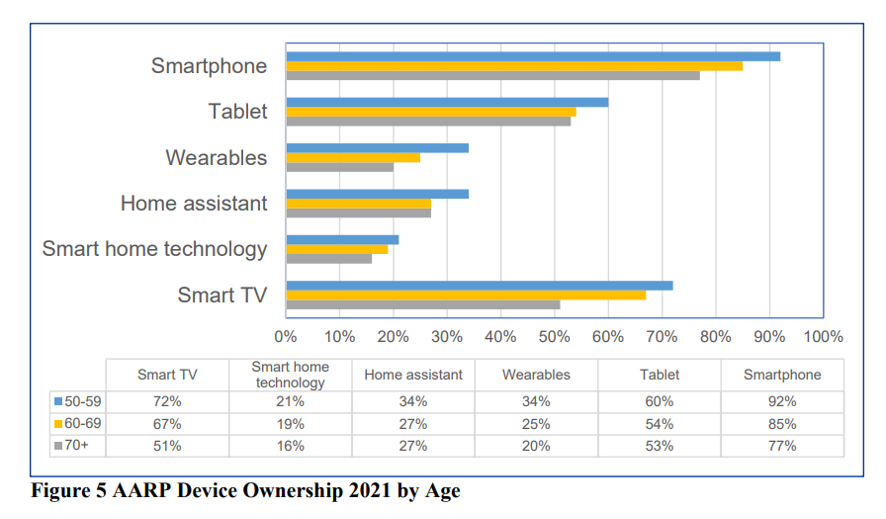 This bar chart from the AARP’s latest survey into older peoples’ ownership by tech device type lays the foundation for the forecast. This is the base of the demand side for digital health, where older (over 50 years of age) health consumers can utilize devices they already use in daily life for health, wellness, and security.

Read More:  5 Ways to Reconnect With People for Emotional Support in Uncertain Times

One in four people over 70 also had a home assistant like an Alexa voice device.

Laurie also pointed out that both men and women are Apple Watch consumers, with nearly one-half of purchases made by women in 2019. The older adult consumer segment for Apple Watch adoption has the greatest growth, increasing 15% in 2019.

Now women AND men are acquiring Apple watches. Initially it was a guy-thing – an Apple
Watch was perceived to make one look cool. While Apple product purchases in 2015 were
largely made by older men, by 2019, women liked them too – and nearly half of the watches are
purchased by women. Though the absolute percentage is still low, older adults represented
greatest growth, up 15% in 2019. 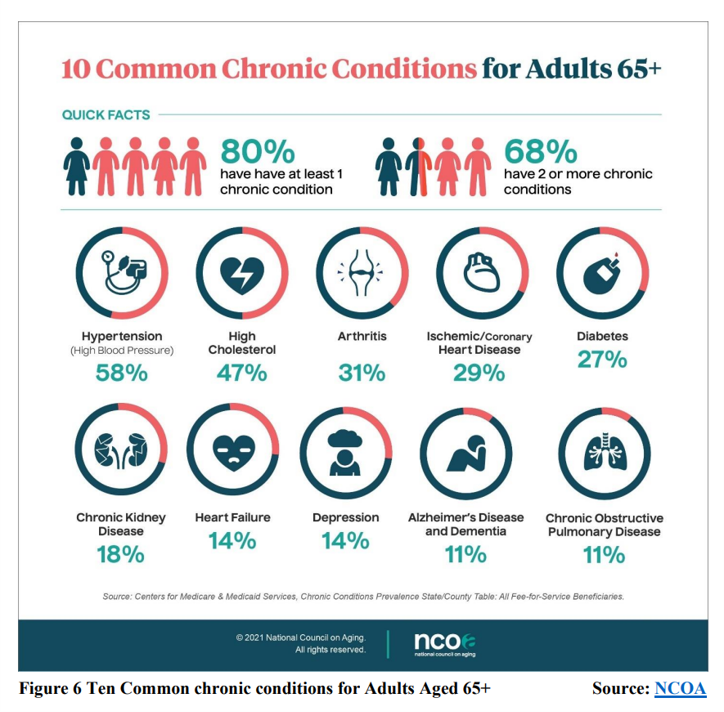 Among the many opportunities Laurie discusses for wearable tech’s potential in bolstering older peoples’ lives, addressing the chronic disease burden ranks high on my list. The National Council on Aging (NCOA) has identified ten common chronic conditions for adults 65 and over, most prevalently hypertension, high cholesterol, arthritis, coronary heart disease, and diabetes in the top 50.

Many of which are amenable to self-care at home for both prevention and disease management.

Among the lowest-hanging fruits are heart disease and diabetes, where there are many forms of digital health tech on the market and others in development to deal with various aspects of self-care such as monitoring metrics like blood pressure or blood glucose.

Laurie points to several opportunities for wearable tech to address chronic care among older patients, such as augmenting and informing the annual check-up and identifying intermittent signals that can predict and risk-manage problems in advance of their occurrence.

In thinking through the future of wearable tech for older people, Laurie identifies barriers and challenges to wearable adoption along with the possibilities. Some of the barriers which are often-overlooked by developers and bullish marketers include usability of the device and the data, clinical accuracy of the measurements, and privacy concerns which are top-of-mind especially for older people who weren’t born into digital nativity.

For the future, think health-aware wearables that blend seamlessly into our lives, providing real-time coaching and support, and voice-based access.

Health Populi’s Hot Points:  Laurie’s bottom-line is that there’s a “bright future for the wearables market.”

Among the pillars on which that bright future sits are the potential for wearable tech to be “prescribed” to patients (regardless of age). For clinicians to actually prescribe devices, with a capital “P” (versus “recommend”), each wearable tech device must demonstrate its utility to both the prescriber and the patient (in addition to her caregiver, who plays a growing role in loved one’s care).

We can look to Medicare Advantage programs in the current landscape of health care payment: these plans and “payviders” have an incentive to adopt useful tech that helps people care for themselves at home and on-the-go, and there are examples of plans doing just that. For example, Devoted Health was the first MA plan to subsidize an Apple Watch. Devoted Health was also early to offer rides/transportation with Alivi and Lyft to members heading to the gym, pharmacies or the doctor’s office.

Here, older patients may, ironically and impactfully, be in the vanguard of the first patients who adopt and scale wearable tech to manage medical care. This is a fast-moving space, and Laurie has provided us with a smart roadmap to keep tracking its evolution.