An international outbreak of respiratory illness caused by a novel coronavirus has killed at least 56 people and sickened at least 2,000, according to the Chinese health authorities.

The outbreak began in Wuhan, China, at a market selling live poultry, seafood and wild animals. Now the virus has turned up in 11 other countries, including Japan, South Korea, France, Australia, and the United States. Investigators in still other nations, and in several American states, are evaluating possible cases.

Officials in China have closed transportation links from and within Wuhan and other affected cities. Buses are not operating between provinces, and service is limited in and out of Beijing. Schools have been closed in affected regions. Sales of tourist packages from China to other countries have been halted. Major attractions and festivals have been closed down, as well as movie theaters.

On Saturday, Xi Jinping, China’s leader, convened a meeting of the country’s top leaders to discuss what he called a “grave situation.”

Five cases have been confirmed in the United States: one in Washington State; one in Chicago; one in Arizona; and two in California. All patients recently had traveled to China.

But much is still unknown about the newly identified virus, including how easily it is transmitted and how often it causes severe disease that can lead to death. Here’s what we have learned so far about the virus and the outbreak.

What is a coronavirus?

Coronaviruses are named for the spikes that protrude from their membranes, which resemble the sun’s corona. They can infect both animals and people, and can cause illnesses of the respiratory tract, ranging from the common cold to dangerous conditions like Severe Acute Respiratory Syndrome, or SARS, which sickened thousands of people around the world — and killed nearly 800 — during an outbreak in 2003.

How dangerous is it?

Health officials around the world are alarmed, but it is hard to accurately assess the lethality of a new virus. On Thursday, the World Health Organization declined to declare the outbreak a global health emergency.

“When we get a new infectious disease, we learn about the most severe cases first, the top of the pyramid as it were,” said Dr. William Schaffner, a professor of preventive medicine and infectious diseases at Vanderbilt University Medical Center. “As the investigation goes on, we often learn there are less severely infected people, and even people who are infected who don’t get sick at all.”

By comparison, roughly 200,000 people are hospitalized with the flu each year in the United States, and about 35,000 people die.

But while some scientists say the new virus appears to be less severe than other coronaviruses, like SARS and MERS, it is not clear whether the Chinese authorities have been fully transparent about the number of infections and deaths, or even whether these figures are being carefully tracked.

Read More:  Is Rural Appalachia a Hotspot for Alzheimer's?

“The information we know is changing rapidly,” said Dr. Julie Vaishampayan, chairwoman of the public health committee of the Infectious Diseases Society of America. “Whenever a new virus comes out, it takes a while to learn about it. There are going to be a lot of changes.”

How is it transmitted?

The Wuhan coronavirus is most likely transmitted through coughing and sneezing, as is the case with influenza and other respiratory viruses, Dr. Vaishampayan said.

Scientists are scrambling to understand how easily the virus is transmitted. A close examination of one family, published on Friday in the medical journal The Lancet, suggested that the virus was passed from one ill relative to six others; only two had contact with initial patient.

The Chinese Center for Disease Control and Prevention analyzed 198 confirmed cases in Wuhan. Researchers found that 22 percent had direct exposure to the meat market, and 32 percent had contact with people who had a fever or respiratory disease.

But roughly half had neither been to the market nor had contact with anyone who was sick. Sixteen health care workers were infected while caring for patients, the report said.

How many people have been infected, and how many have died?

At least 2,000 people are known to have been infected, and at least 56 have died. Most of those infected lived in Wuhan, a city of 11 million in central China, or had recently traveled there.

Epidemics caused by other members of the viral family, SARS and MERS, have had high death rates: 10 percent for SARS, and about 35 percent for MERS. It is too soon to know the death rate for the new virus.

Influenza kills more people every year, but its mortality rate is only about 0.1 percent. The number of the deaths is high because so many people become infected. The death rate of the pandemic Spanish flu in 1918 was about 2 percent.

Widespread coronavirus epidemics have the potential to take a heavy toll, so the health authorities scramble to stamp them out.

A major concern is that with both SARS and MERS, a few patients inexplicably became “superspreaders” who infected huge numbers of people. At a hospital in Seoul, South Korea, in 2015, one man with MERS transmitted it to 82 patients.

Where did the new coronavirus outbreak start?

On Jan. 8, The New York Times reported that Chinese researchers had identified a new coronavirus as the pathogen behind a mysterious illness that had sickened 59 people in Wuhan.

The cases were linked to workers at a market that sold live fish, animals and birds. The market was later shut down and disinfected.

Read More:  How Researchers in West Java Saved the Beach With Coconut Fiber 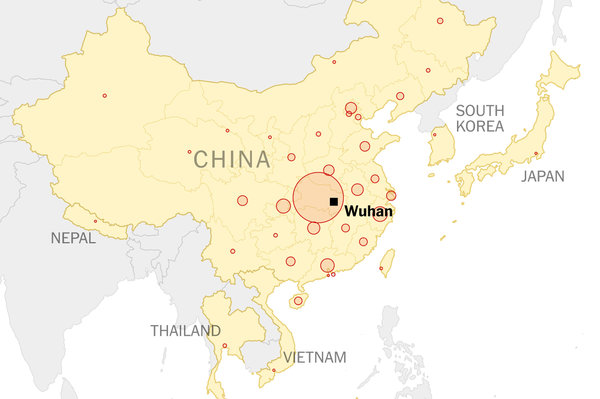 Wuhan Coronavirus Map: Tracking the Spread of the Outbreak

The virus has sickened more than 2,000 people in China and a handful in other countries.

What treatment is available?

The main treatment is supportive care, including making sure the patient is getting enough oxygen, and using a ventilator to push air into the lungs if necessary, Dr. Vaishampayan said. Patients should rest and drink plenty of fluids “while the immune system does its jobs and heals itself,” she said.

No drugs have been approved for any coronavirus diseases, including the Wuhan coronavirus, though an antiviral medication called remdesivir appears to be effective in animals.

Scientists were very quick to identify the virus, and officials with the National Institutes of Health said that advances in technology may make it possible to test a vaccine against the Wuhan coronavirus within three months.

What is the source of the outbreak?

Animals are the most likely primary source of the outbreak, but it is still not clear which animals. Past outbreaks of similar illnesses, including SARS, also are believed to have emerged from live animal markets. The coronavirus that causes MERS is transmitted to humans by camels.

But though the first patients sickened by the Wuhan coronavirus were thought to have contracted the disease at the market, the Chinese authorities said the illness can also be transmitted from person to person. A growing number of people, including medical professionals caring for patients, have become infected. That makes the virus more difficult to contain.

What are the health authorities doing to contain the virus?

The Chinese authorities have closed off transportation links from Wuhan and other affected cities, encircling roughly 50 million people. Bus service between provinces has been curtailed, as has travel abroad. The government is building two new hospitals to handle coronavirus patients; they will be finished in about two weeks.

Large public gatherings and performances have also been also banned in Wuhan, and the government announced that all residents were required to wear masks in public to help prevent the disease from spreading. Movie theaters were closed throughout much of the country.

Governments around the world have been screening passengers from Wuhan at ports of entry for signs of illness. North Korea temporarily barred foreign tourists, most of whom come from China.

What are the symptoms of infection?

Symptoms include fever, severe cough and difficulty breathing or shortness of breath. The illness causes lung lesions and pneumonia. Milder cases may resemble the flu or a bad cold, making detection difficult. The incubation period — the time from exposure to the onset of symptoms — is believed to be about two weeks.

Read More:  5 Fitness Myths That Are Ruining Your Results

On Friday, the Chinese authorities said they had seen cases that did not meet the usual description. In these patients, the first symptoms were gastrointestinal, including diarrhea.

I’m traveling to China. What can I do to protect myself?

On Thursday, the Centers for Disease Control and Prevention issued a warning against all nonessential travel to Wuhan.

Dr. Schaffner, of Vanderbilt University Medical Center, said that travelers to China should “absolutely” avoid live animal markets, and keep their distance from animals in rural areas as well. He reiterated that travelers should practice “good hand hygiene” — washing hands frequently and avoiding touching their faces — and that they should maintain a distance from anyone who is coughing and sneezing.

Travelers should monitor their health upon their return. If a cough or fever develops, call health providers before going in, so they can prepare and put protective measures in place.

Should I wear a mask?

If you have a respiratory infection, wearing a mask helps protect the people around you from illness by reducing the risk of spreading the infection, experts say. Wearing a surgical mask may somewhat protect you from infection in a crowd if there is an outbreak, but, generally, surgical masks are not closefitting enough to filter all the air you are breathing in.

Experts say you are better off washing your hands frequently throughout the day.

At the moment, the risk of infection with the new coronavirus in the United States — where there are only five confirmed cases so far — “is way too low to start wearing a face mask,” Dr. Rabinowitz said. “The risk is very, very low to the general public.”

What are U.S. health officials doing to prevent an outbreak here?

American health officials are working closely with the W.H.O. and state and local health departments to monitor the situation. The C.D.C., which has activated an emergency response system, has dispatched workers to major airports to screen incoming passengers from Wuhan for signs of illness, and it has developed a diagnostic test for the virus, technically called the 2019-nCoV virus.

The C.D.C. has instructed hospitals around the country to ask patients who come in with fever or respiratory illness about recent travel to Wuhan or about contact with anyone who recently traveled to Wuhan. Health care providers are to isolate patients who may be infected and to wear protective gear when treating them.

C.D.C. teams are providing assistance with local investigations in Chicago and Washington State, and helping to track down anyone who may have come in contact with the infected individuals. C.D.C. personnel have been dispatched to airports to help screen passengers arriving from China.