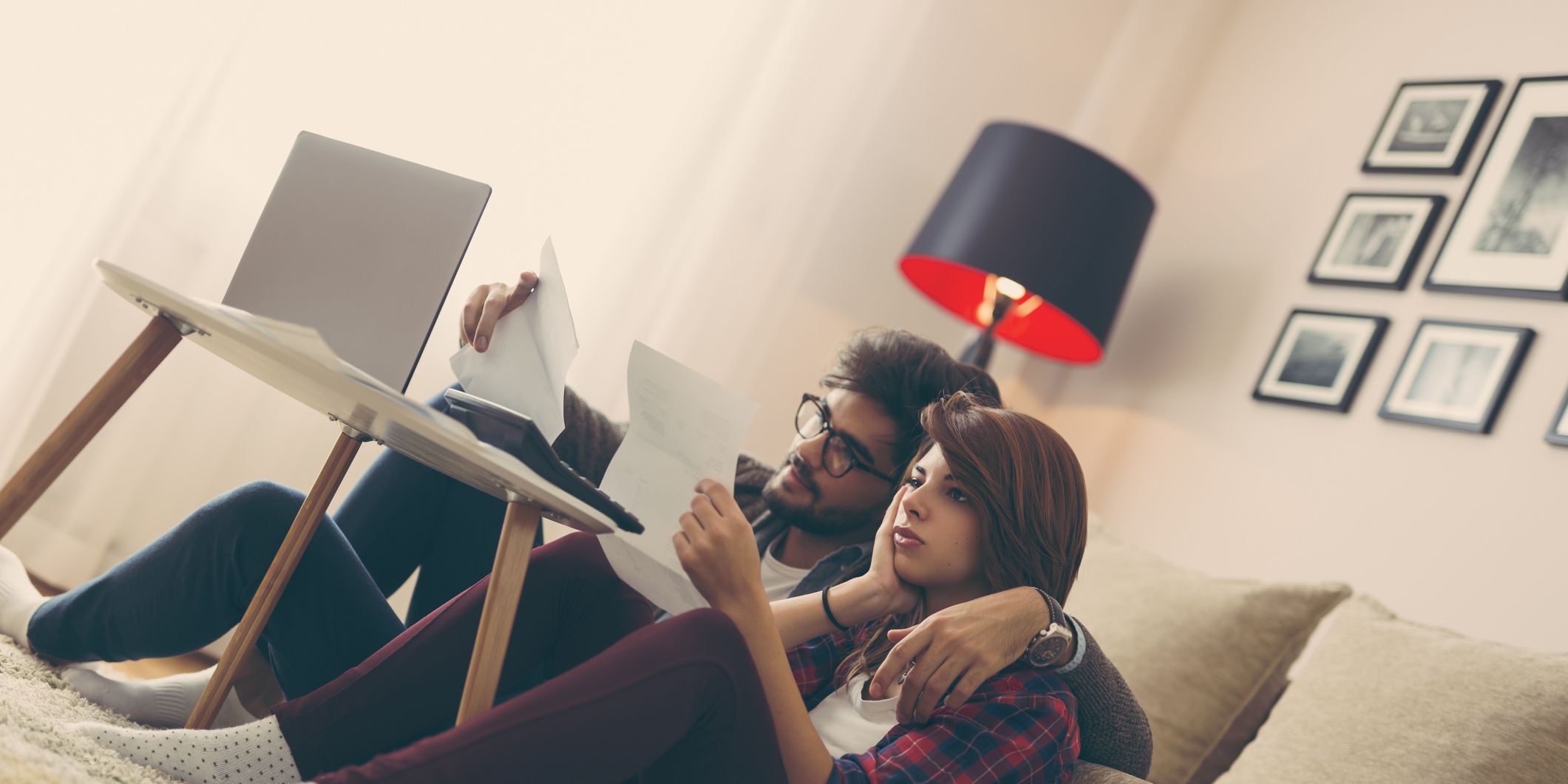 Getting sick or hurt enough to go to the ER feels terrible enough. What’s sometimes nearly as bad, however, is the dread and anxiety of waiting for the inevitable medical bill—the one that’ll risk putting you in the financial equivalent of the intensive care unit, especially if you don’t pay on time.

For many people, that’s one reason why there’s such a strong urge to just put it all on a credit card and worry about it later—and that’s mistake number one, says Carolyn McClanahan, M.D., a physician turned certified financial planner with Life Planning Partners in Jacksonville, Fla.

For one thing, you’ll still have to deal with that debt one way or another, and delaying it adds interest. If you’re stressed about how to handle your medical debts, try not to panic—in fact, do your best to keep your emotions out of it, advises Caitlin Donovan, director of outreach and public affairs for the Washington, D.C.-based National Patient Advocate Foundation.

Even if you’re one of the three in ten Americans short on the savings to cover what you owe, there are still steps you can take that won’t risk putting you further into the red. Here’s where you should start when you get a hospital bill you can’t afford to pay.

Make sure your statement’s accurate.

“Medical bills are notorious for being incorrect,” McClanahan says. And those errors are rarely made in your favor.

Bills often come in one indecipherable lump sum, so call and ask for an itemized statement. Often, services are listed by what’s called CPT codes. Googling can tell you what these strings of text stand for, Donovan says.

First, look for obvious errors—duplications and procedures you definitely didn’t receive (say, a breast exam or a catheterization). Another common mistake is charges for medications you brought from home, McClanahan says.

Because it’s tough to know exactly what happened to you when you’re hospitalized, flag anything you have questions about. Call the hospital’s billing department and ask for an explanation of items that aren’t clear—and demand any errors be removed, McClanahan says.

Along the way, note the name of the person you talked to and ask about how long it will take to receive the new statement. Set a reminder of that date in your calendar, and call back if you don’t receive it. “Follow up, because somebody may ignore it—and then if you ignore the bill, it could go to collections,” McClanahan says.

Obviously, this only applies if you’re covered—if you don’t have insurance, skip straight to step five. But if you have a plan and it’s not kicking in like you think it should, there’s probably a reason, Donovan says. They might have deemed your procedure not medically necessary, or it may have been provided by an out-of-network doctor.

Call the customer service line on your card and ask point-blank: “What would it take for this to be covered?” Donovan recommends. Some similar procedures have different CPT codes, and the billing department can make a change and resubmit it to your insurer. A note from your doctor might prove you really did need a certain treatment. “If it was out of network, if it was an emergency, talk about how that was perhaps your only option or you didn’t have an option and ask them to cover it,” she says.

All this may take some patience and persistence—but if it winds up saving you thousands of dollars, it’s worth it. Stay calm: “Look at this as a contract dispute. So try if you can to use your plan language and get as much backup as you can,” Donovan says.

The Patient Advocate Foundation has a downloadable guide to navigating this process and understanding the laws in your state surrounding it. This includes sample letters and instructions on what supporting information to include, such as test results, peer-reviewed journal articles, and notes from your doctor.

This process can feel overwhelming—but outside help is often available. If you have a chronic condition, you might qualify for personal assistance from a PAF caseworker; checktheir website for details. Your state may also have a consumer assistance program.

Those types of programs can also inform you of your rights, Donovan points out. Besides insurance claim denials, another reason people get big hospital bills is because of something called balance billing—when a hospital invoices you for the difference what they decide to charge and what your insurance will reimburse. It’s now illegal in many states, so fighting back could get your bill erased completely.

Stay out of collections.

If you don’t pay a bill by the due date, you risk having your debt sent to a collections agency. Avoid this if at all possible—calls can swiftly become relentless and the process can wreck your credit. Fortunately, the hospital has an incentive to delay the handoff, since collections agencies pay them back only pennies on the dollar, McClanahan says.

While you’re working with your insurance company on requests or appeals, keep the hospital billing office in the loop. Inform them, in writing, that you’re contesting the validity of the debt, and why.

If you do get sent to collections while you’re appealing or negotiating, don’t pay anything—doing so is an admission that you owe the debt, McClanahan says.

If your appeal’s denied or you don’t have insurance, you still have options. Contact the hospital’s billing, financial aid, or financial assistance office directly. These could be the same or have slightly different personnel, so call and ask.

Many hospitals offer some sort of assistance programs. Depending on your income and circumstances, you might or might not qualify—but you never know until you ask, Donovan points out.

If they don’t have a program that applies to you, it’s time to start bargaining. Remember that hospitals cut deals with insurance companies and the government all the time. “They’re going to send you the list price and nobody should pay list price,” McClanahan says. “It’s like buying a car but worse.”

Even if they won’t cut your rate as far as you want, ask about a payment plan. You might be able to pay a small amount each month with no interest. “As long as they know you’re trying, they won’t report you to collections,” she says.

Besides the hospital itself, there might be other organizations that can offer funding assistance. If you have a specific illness like cancer, disease-based organizations will often foot part of your bills. PAF has an online National Financial Resource Directory and app that can point you toward appropriate options.

Your church or another community-based non-profit might be willing to help out. One thing to consider: Even if you can’t find help for your medical expenses directly, you might be able to locate resources to assist with other bills, like housing or transit. That can free up some cash that makes the hospital costs less overwhelming, Donovan says.

If all else fails, there’s always crowdfunding sites like GoFundMe—even if it doesn’t pay all your bills, it can help with some of your costs. “We kind of think it’s a tragedy in general that, in the American system, we have people who have to resort to GoFundMe for their medical bills,” Donovan says. “But if you have a huge bill, you should use every avenue you possibly have.”

Take steps to prevent it next time.

Given the complexity and lack of transparency in the health care system, it’s tough to avoid surprisingly large bills completely. But if your illness or injury means it’s likely you may head to the hospital again, it’s a good idea to take preventive measures.

The biggest bills usually come when you go out of network. So start during open enrollment—evaluate your options carefully and choose a health care plan that has the doctors and hospitals you want to see, Donovan says.

If you have time to plan for a test or procedure, call your insurer ahead of time to ask what’s covered and what isn’t. When they say something’s covered, get it in writing. That way, if they deny your claim later, you have backup for an appeal.

When you get to the hospital, stress that you only want to see providers that are in your network—including doctors like anesthesiologists and radiologists—and that your lab work be sent to an in-network facility.

“I’ve heard of patients,” Donovan says, “making a sign with pen and paper, taping it to their door in the hospital, and saying, ‘Do not come in this room unless you are in network on Aetna, Anthem, or Blue Cross Blue Shield.’”

And if all this sounds somewhat ridiculous, consider trying to make a bigger difference in the system. Take particularly egregious hospital bills to a local or national journalist, and to your elected officials. “I encourage everybody to spend five minutes a week calling their representatives to say, ‘Fix our crazy healthcare system,’” McClanahan says.