The ad pictured above was for a Chicago-area hospital.  But such marketing is popping up all over the U.S.  It’s happening not just in paid-for ads and marketing, but also in supposedly independently vetted journalism. Here are just a few of many examples you can find online. 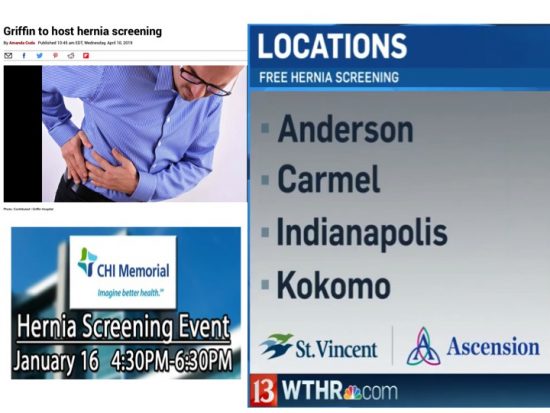 In Amarillo, Texas, a TV news anchor presented a fawning promotion for a medical center’s free hernia screening which was also tied directly to a promotion of its robotic surgery system.  The anchorwoman could barely contain her admiration for the effort, gushing: “It is free. How nice is that? … You’re making it easy and patient-friendly.”

A Knoxville, Tenn., TV station gave several minutes of free “news” promotion to a local hernia screening.  Note that the surgeon who is interviewed had a markedly more positive view of outcomes data than what I cited above.  And she and the anchorman emphasized that it’s “FREE….free….free” — even if you don’t have insurance.  What they didn’t discuss was what the bills would be and who would pay them if the screening did find anything deemed operable.

Just about 110 miles away, in Chattanooga, another TV station promoted another medical center’s free screening event — again, with a direct tie to the center’s robotic surgery system.

An Indianapolis TV station promoted free hernia screenings at multiple locations, with a surgeon saying, “I think it’s important for them to know that the hernias are not going to fix themselves.”  No mention of hernias that don’t need fixing.

A Connecticut news site touted a local hernia screening, emphasizing only what can go wrong if you don’t find it and treat it:

If left untreated, hernias can get bigger over time, become more visible and can cause serious problems, including blocking the intestine, pinched blood vessels and the hernia can break through the skin.

There is almost robotic repetition in the themes you hear consistently in these robotic surgery promotions.  The emphasis is: It’s free. If you must have surgery, the outcomes from robotic surgery are fantastic.  And if you don’t have surgery for the hernias we might find, you’re asking for big trouble.

All of these promotions occurred in recent months.  Hmmm.  It sure feels like a promotional push from the “mother ship” — Intuitive Surgical Systems, makers of the da Vinci robotic surgery system. Indeed,  hernia repair via robotic surgery is one of the key promotions now on Intuitive’s website. 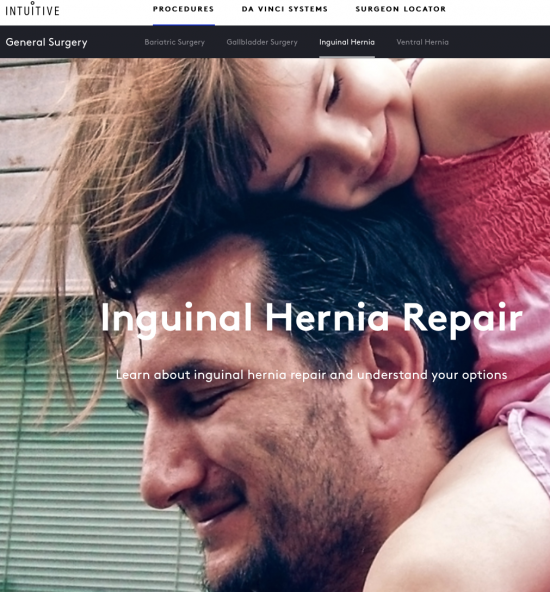 But is there really an advantage for patients? Maybe all of that television happy talk time could be spent looking into that issue for the benefit of viewers.