As COVID-19 continues to churn through the world’s population, one fact looms like a giant warning sign over the pandemic: the mounting, tragic death toll in Italy.

Bodies stacked up in churches, overburdened crematoria and a convoy of trucks moving the deceased have been among the defining images of the crisis.

But Italy’s huge, nearly 10-per-cent mortality rate among confirmed cases tells only part of the story.

Fatality rates based on current statistics vary dramatically among nations, with some recording thousands of infections but death rates of less than one per cent, others nearing Italy’s frightening levels.

As of Tuesday, for instance, deaths represented 0.43 per cent of confirmed COVID-19 cases in Germany, 0.34 per cent in Norway and 0.39 per cent in Singapore, according to the World Health Organization. The rate hovered around one per cent in several other countries, including Canada and the United States, but was over 5 per cent in the United Kingdom, 6.6 in Spain and 7.8 in Iran. 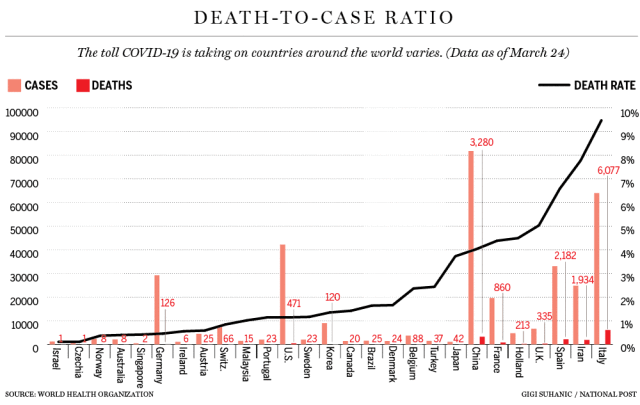 One reason for the disparity seems clearly to revolve around the number of tests a country conducts. Some with less testing than others have likely identified a relatively small proportion of the cases, skewing their death ratio upwards.

But experts also cite differences in demographic and political issues like smoking rates, average age and spending on health care as possible factors.

Even cultural considerations might make a difference, suggests David Kelvin, a Dalhousie University microbiologist whose infectious-disease research group has branches in China and Sardinia, Italy. He stresses that he has no scientific data to back up this hunch, but notes that Italians tend to greet each other with an embrace and kisses — versus the handshake common in northern Europe and North America — potentially passing on a more dangerous dose of COVID-19.

“Your odds of being infected are likely much greater with a kiss on each cheek and a hug,” said Kelvin. “And if viral load plays an important factor in outcome of the disease, the chances of getting a higher viral load is probably greater getting up very close.” 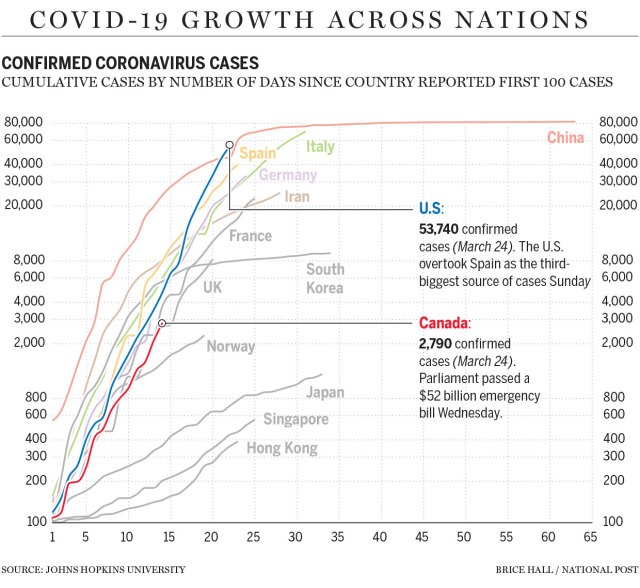 But experts caution that it’s far too early to say whether any such factor has definitely played a role in the pandemic’s lethality, noting some countries may simply be further along in the outbreak and so seeing more people die. A health-care system that’s overwhelmed by a massive number of cases and unable to properly care for every critically ill patient — such as Italy’s — could also experience more fatalities.

Only when the pandemic is over will it be possible to look back and determine for sure what made a difference, they say.

Even so, as scientists and the public struggle to understand a new and complex disease, mortality and the volume of severely ill patients represent clear-cut indicators of its impact, with death statistics easier to compare between countries.

Those comparisons can be intriguing.

Italy has rapidly become everyone’s worst-case scenario. Its 6,000 deaths as of Tuesday morning represented 9.5 per cent of confirmed cases. Spain was not far behind, with 2,182 lives lost, while Iran had close to 2,000 fatalities.

Read More:  How to Train Clients With Diastasis Recti

So why does Germany, with almost as many cases as Spain, have just 126 deaths? Or what about Norway, which had recorded 2,371 infected residents by Tuesday, and only eight deaths? Australia and Singapore, both of which have close travel ties to COVID-19’s epicenter in China, have similarly low death rates.

Age may play a factor. Data from around the world indicate that older people suffer a much higher death toll from COVID-19, and Italy has one of the world’s oldest populations — with a median age in of 46.5, according to U.S. government statistics. Still, Germany’s median age is actually slightly higher.

The extent to which older people in a society mix with younger people, risking infection and more serious illness is another possible factor, said Chad Wells, an Ontario-based research associate with Yale University’s Center for Infectious Disease Modeling and Analysis.

And in Italy, “families are precious,” leading to close contact among them, notes Dalhousie’s Kelvin.

Close to 20 per cent of Italians 15 and over, 22 per cent of Spaniards and 25.4 per cent of French people smoke daily, according to Organization for Economic Co-operation and Development figures, compared with about 12 per cent in Canada and Australia. But muddying the waters again, almost 19 per cent use cigarettes in Germany.

Regardless, it would be unwise to take any solace in the possibility — still unproven — that Italy is an outlier in terms of mortality, said Wells. The explosion of cases, many severe, in New York is a warning that Italy could be repeated elsewhere, he said.

As for that more intimate southern European form of greeting? It may have been a factor early in the pandemic, but probably not later as Italians learned of the risks, said Warwick’s Gill.

“It would be wonderful to think the repressive Brits have fewer cases because we don’t like to touch each other much,” he said. “But I think that might rate little more than a wry smile.”