A woman was left throwing up blood when a freak snowboarding accident ‘tore her pancreas in half’.

Sophie Gillett, 34, from Vancouver, Canada, was a highly experienced snowboarder when she hit the slopes in December 2014.

But with little snow on the ground, a protruding rock launched her forward onto hard snow and ice, leaving her in agonising pain.

After a two mile (3.2km) walk back to safety, her symptoms worsened before she was rushed to hospital.

Screaming in excruciating pain for hours, scans eventually revealed her pancreas had torn in two with the impact of hitting the hard ground.

The brand coordinator has been left with a five-inch scar following surgery, but was initially terrified to face ‘losing her life’.

The pancreas is an uncommon organ to be injured, occurring in less than two per cent of blunt trauma cases, data shows. 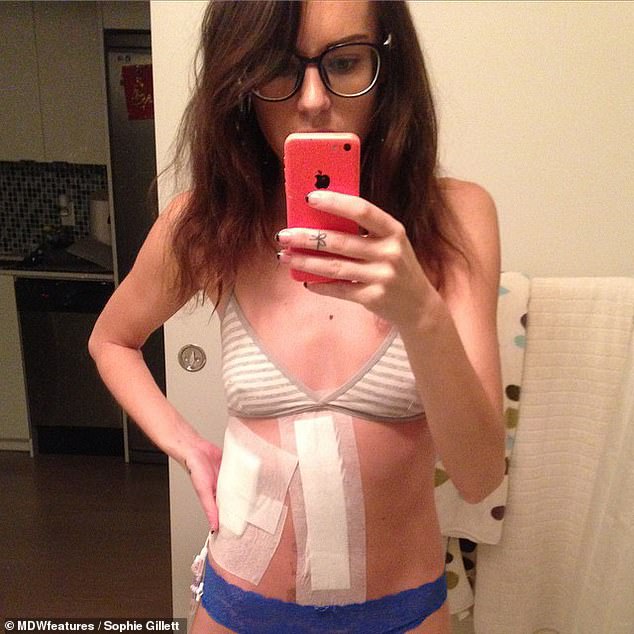 Sophie Gillett, 34, was left throwing up blood when a freak snowboarding accident ‘tore her pancreas in half’. She had emergency surgery soon after the incident 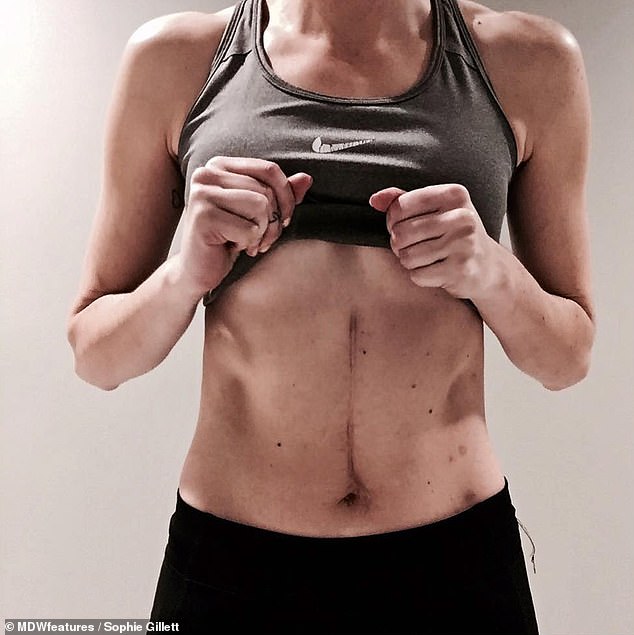 Ms Gillett, pictured showing her scar, was screaming in excruciating pain for hours before scans revealed her pancreas had torn in two with the impact of the hard ground 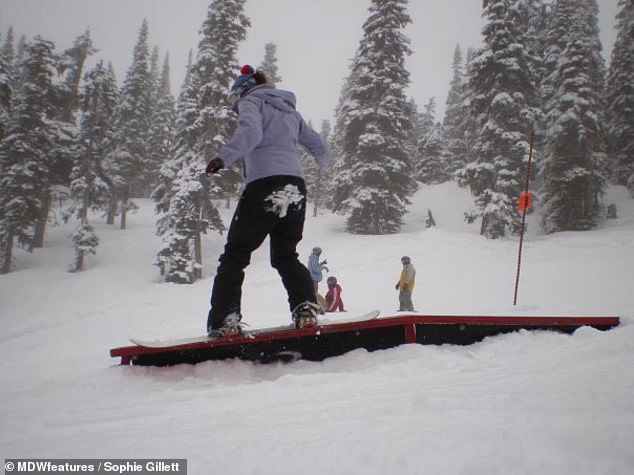 The snowboarder, pictured in Whistler before her accident, had hit the slopes when there was not much snow. She hit a rock which launched her into the air

Ms Gillett had been a keen snowboarder since the age of 15, even living next to a slope for four years during her twenties so she could snowboard five times a week.

In December 2014, Ms Gillett and her now fiancé, Farren, were driving out of Vancouver to the mountains in Whistler so they could go snowboarding.

They noted how little snow covered the mountains and how poor the terrain was, before finding a less crowded area they wanted to ride down.

HOW CAN YOU DAMAGE THE PANCREAS?

Traumatic injury to the pancreas is rare and difficult to diagnose.

In contrast, traumatic injuries to the liver, spleen and kidney are common and are usually identified with ease.

Pancreatic injuries are usually subtle to identify by different diagnostic imaging modalities, and these injuries are often overlooked in cases with extensive multi-organ trauma.

Read More:  Yeast infection after sex: What to know

The alterations of post-traumatic pancreatitis may not be visualized within several hours following trauma as they are time dependent.

Delayed diagnoses of traumatic pancreatic injuries are associated with high morbidity and mortality.

However, only five per cent of the pancreatic injuries are directly related to the fatal outcome.

Blunt trauma to the pancreas is, in most instances, caused by a sudden localized force to the upper abdomen that compresses the pancreas against the vertebral column.

Ms Gillett, who was a snowboard distributor at the time, said: ‘Farren had just driven out to visit me for the holidays and back then, going up to the mountains to ride was our passion.

‘When we got to the area we initially wanted to ride on it was heavily crowded. So we took a detour to find somewhere else.

‘As I had lived in Whistler for years, I knew the mountain terrain quite well. That day the snow was barely even half way up the mountain, with large rocks protruding everywhere.

‘The actual run I was hurt on even had a flowing stream as it wasn’t cold enough and there wasn’t enough snow.

‘The mountain itself was in horrible condition and to this day I believe it shouldn’t have been open.

But despite her concerns, Ms Gillett took the risk and went snowboarding.

She collided with a protruding rock which launched her forwards onto hard-packed snow and ice.

‘I was the first to go down the run and I remember seeing the large rock,’ Ms Gillett said.

‘I remember hitting the rock and then being in the air before hitting the ice and it knocking the wind out of me. Something felt instantly weird inside.’

Ms Gillett was assessed by ski patrol on the spot who saw nothing wrong with her.

They said if she wanted further assessment, she either had to walk to the chair lift, or wait two hours for more ski patrol staff.

Ms Gillett opted to walk the two miles to the chair lift, unaware that her pancreas was split in two. 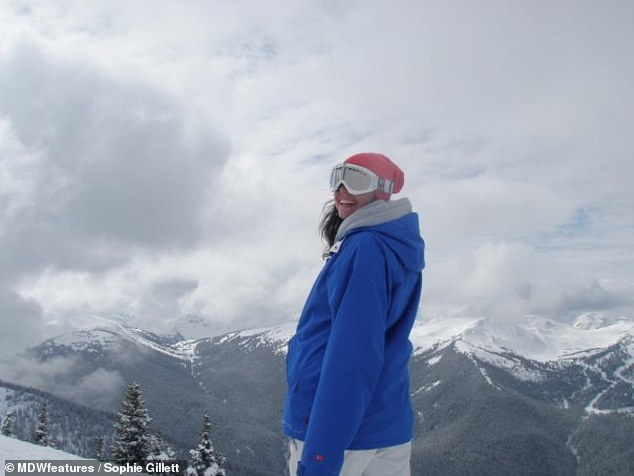 Ms Gillett, who has been snowboarding since she was 15 years old, said the run shouldn’t have been open that day, as the mountains were in ‘horrible’ condition with lack of snow 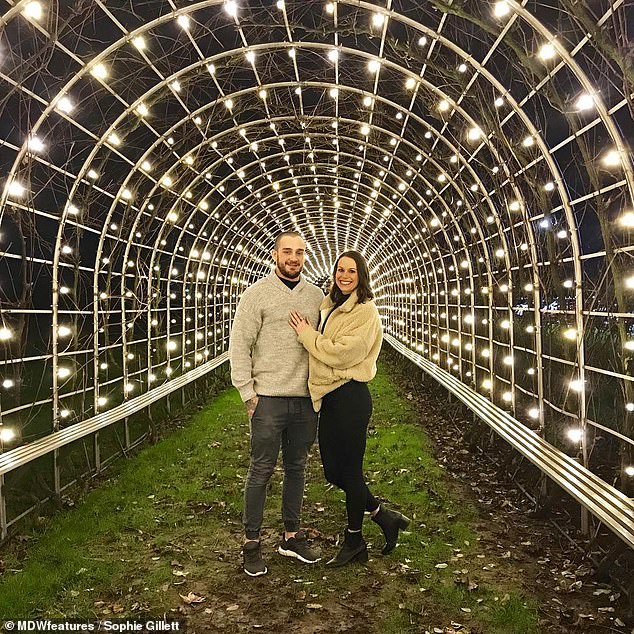 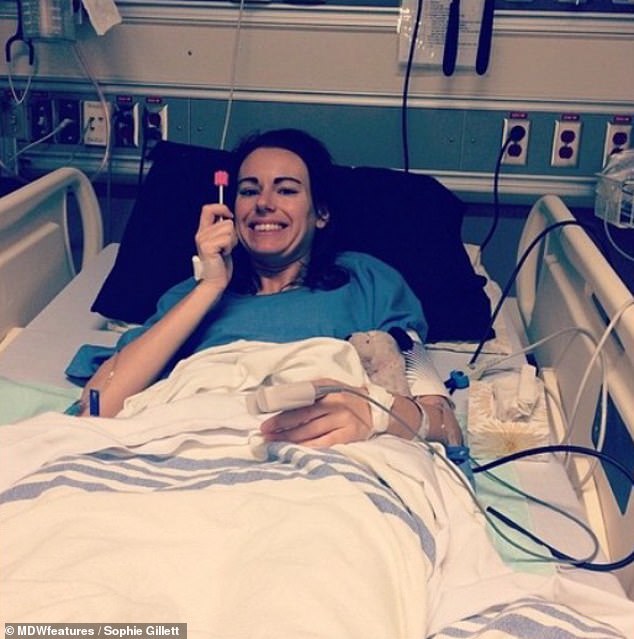 Ms Gillett was rushed to hospital when her condition worsened. Ski patrol denied to give her any help at the scene or after a two mile walk back to the ticket office 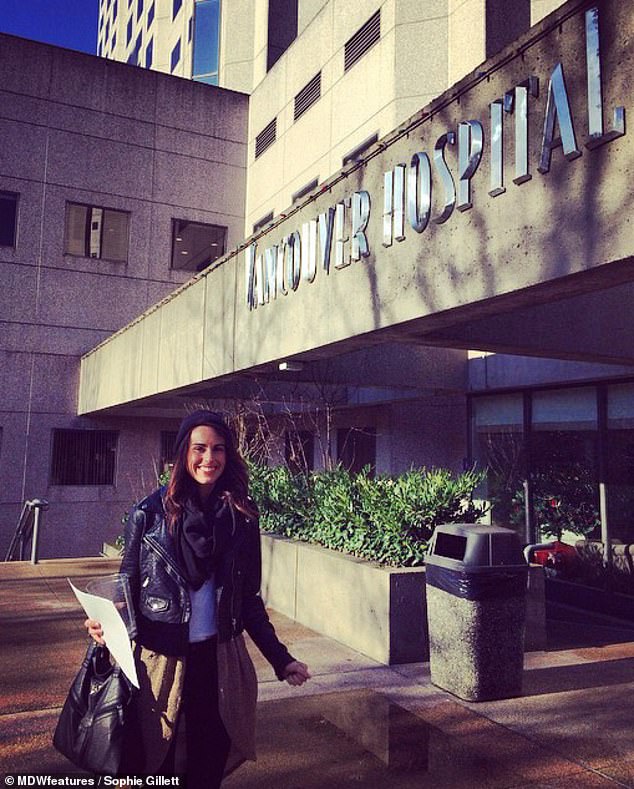 Ms Gillett left hospital a lot sooner than was expected. Doctors were baffled by her story and repeatedly asked her to re-tell how it happened, according to Ms Gillett

After other members of the ski patrol at the ticket office refused to see her, presumably believing her symptoms were nothing other than bruising, Ms Gillett returned home.

She said: ‘After the impact, my friend went to get ski patrol while my boyfriend stayed with me.

‘I walked over two miles to the nearest chair lift, since at the time I was unaware my pancreas was split in two parts.

‘Once down, I told them I was hurt and asked to see ski patrol again but was denied.’

A few hours later Ms Gillett began suffering with abdominal pain and throwing up blood, by which point Farren took her to the hospital.

‘I started having intense abdominal pain and went into the bathroom to throw up blood,’ Ms Gillett said. ‘As soon as that happened Farren took me straight to the medical centre.’

‘I spent hours in excruciating pain, yelling and screaming for someone to help me and figure out what was wrong. I had multiple MRIs and a CT scan which showed my pancreas had been damaged.’

Ms Gillett was told that 35 per cent of the tail of her pancreas – the thin tip – was split in two.

She was immediately sent for emergency trauma surgery, called distal pancreatectomy, to remove the tail.

‘My insides had all been moved around in order to get far back enough to reach my pancreas,’ Ms Gillett said. ‘Then they removed the tail and hoped my digestive system would still work.

‘I honestly thought I was going in and would be out the next day. I was an emotional wreck and I cried endlessly at first.

‘It was very hard to process everything and the seriousness I faced of almost losing my life.’

Ms Gillett’s bizarre injuries were a shock to much of the hospital staff who couldn’t understand how her pancreas was so severely damaged.

‘I was classed as a “freak accident”,’ Ms Gillett said. ‘Doctors asked me over and over to explain how I fell as they were stumped on how I hurt my pancreas falling forward.

‘I had student doctors and nurses visiting me to hear my story.’

A pancreas injury, which can be caused by blunt trauma, is not common. The organ sits at the back of the abdomen.

Read More:  That Masters of the Universe: Revelation Finale Left Us Nervous for He-Man

It is more common in children, typically caused by bicycle accidents, as they have less protective fat, according to World Journal of Gastroenterology.

‘Essentially I should have hurt my stomach or spleen as they come before your pancreas,’ Ms Gillett said.

Despite the dangers of her injury, Ms Gillett was up and walking the day after her emergency surgery, much to the surprise of the doctors. 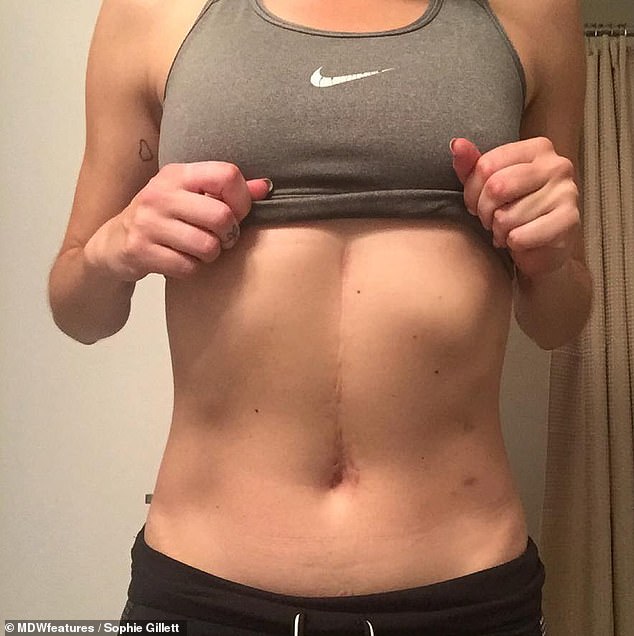 Ms Gillett, showing her scar recently, was out of hospital a lot quicker than doctors expected 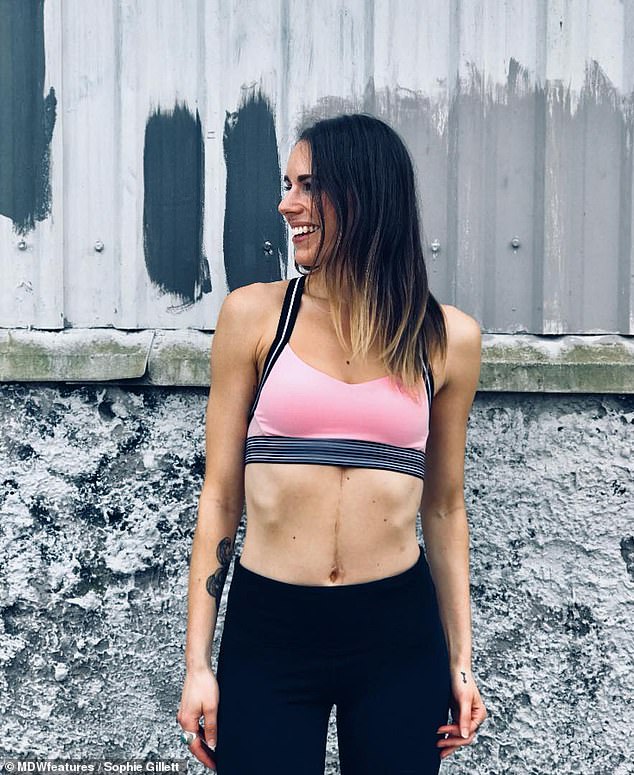 The brand coordinator refuses to let her scar knock her confidence, and still wears crop tops and bikinis. But she said people are critical thinking she ‘wants attention’ 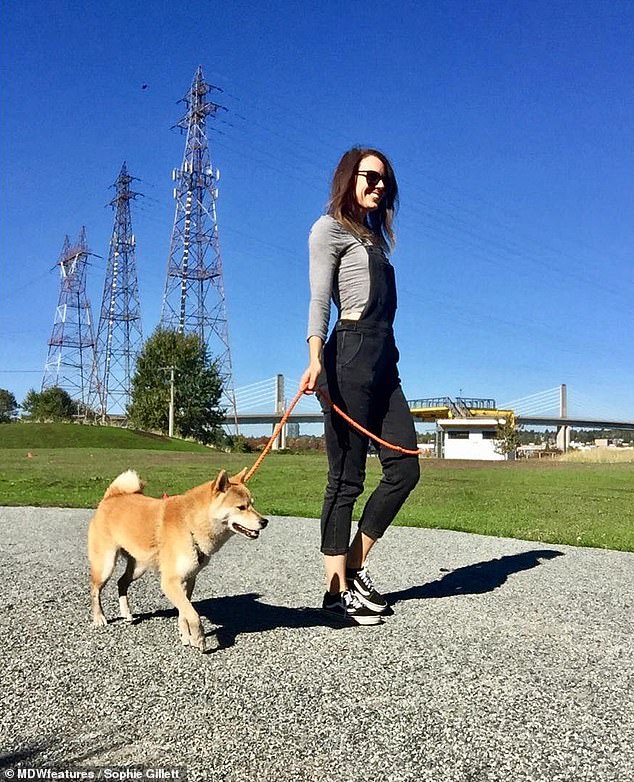 Ms Gillett, pictured walking her dog, got back into light exercise soon after her surgery to help with her recovery 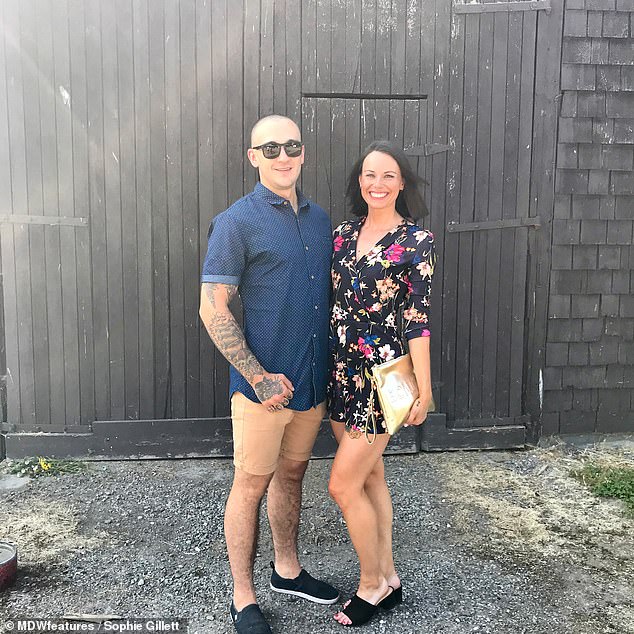 It took months for Ms Gillett, pictured with Farren, to cope with the five-inch scar. She said the incident was ‘hard to process’ and she ‘faced almost losing her life’ 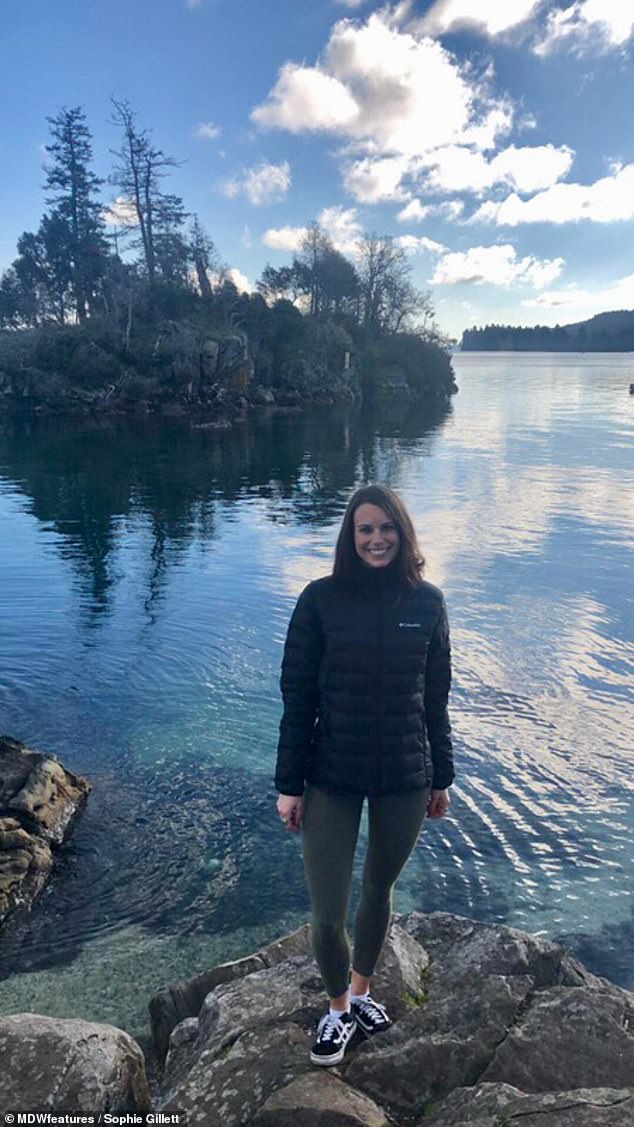 She said: ‘Eating was a daily battle though. I would get some food down, but then it wouldn’t sit due to the pain killers I was on making me feel nauseous, plus my digestive system wasn’t yet ready to process food.

‘When I vomited, it hurt as my abdomen would convulse and I had a fresh five-inch scar and staples.

‘Even in the hospital I shocked doctors by asking to walk the day after my surgery. I knew moving my body would help me recover and save me mentally.’

Ms Gillett kept on top of an exercise routine to help her through recovery.

She said: ‘When I was home, I started doing light exercises including lunges in the hall, sitting squats on a chair or holding a plank for five seconds.

‘I went out on walks because fresh air never felt fresher once you spend time in hospital, and walking promotes circulation which helps heal and recover.’

Ms Gillett wasn’t quite ready to cope with the five-inch scar in her abdomen.

She said: ‘At first I would cry every time I got out of the shower and looked at my broken body in the mirror.

‘But something in me told me I needed to still be me. So, I continued to wear things like crop tops or bikinis at the beach.

‘I would get stares and questions about what happened, and some people thought I was doing it for attention.’

You can see more of Ms Gillett’s recovery journey by visiting @surgery2strong.