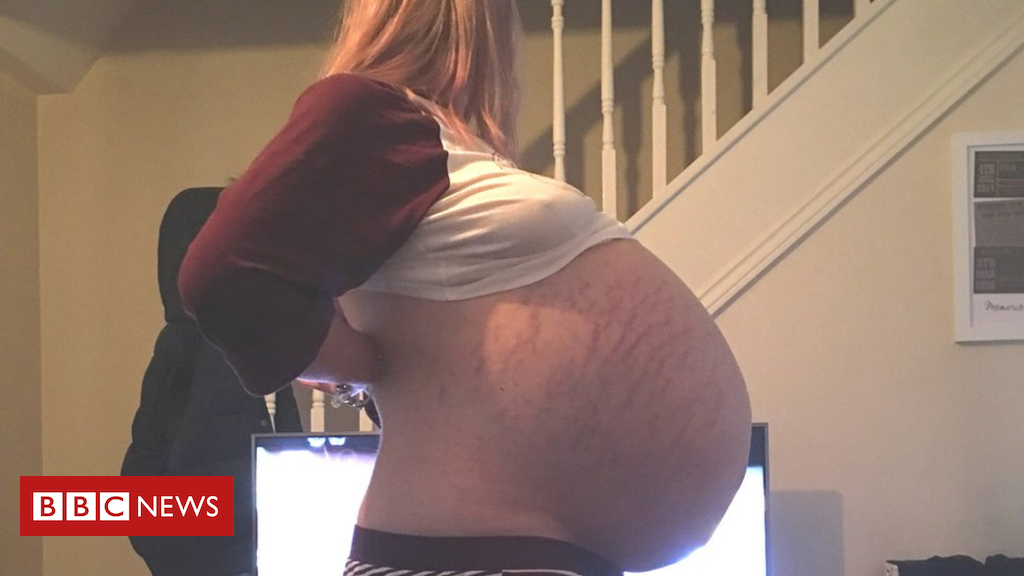 A woman lost a third of her bodyweight after surgery to remove a 26kg ovarian cyst – the weight of seven newborn babies.

Despite multiple negative pregnancy tests, doctors insisted Keely Favell must be pregnant as her stomach grew in size.

When asked questions about baby due dates, she spared people’s embarrassment by playing along.

But the 28-year-old believed herself to be “just fat”.

“I’ve always been chunky, but over the course of a couple of years, I gradually got this tummy,” she said.

“It crept up so slowly that I didn’t know anything was wrong – I just thought I was putting on timber.

“I’ve been with my partner Jamie Gibbins for 10 years and we did wonder a few times if I was pregnant – but we did home tests and they always ruled it out.”

She said it was “so embarrassing” explaining she was not pregnant: “I’d go along with it to spare everyone the blushes.”

After blacking out in her office admin job, Ms Favell plucked up the courage to see a GP in 2016, who said she must be pregnant despite blood negative tests.

“Looking at me, anyone would have thought I was nine months gone.

“It wasn’t the first time I’d been mistaken for an expectant mum… People had seen me waddling around, carrying this lump, and I’d been asked a few times when I was due.”

Still believing Ms Favell to be pregnant, her GP referred her for an ultrasound scan in January last year.

“I was lying there with Jamie beside me as the radiologist moved the probe over my tummy. I saw her eyes widen in horror, but the screen was just blank.

“The look on her face said it all – something was wrong, and when she said she had to get a consultant I started to panic. Jamie did his best to reassure me but I felt paralysed with fear.”

She was sent for an emergency CT scan which revealed a cyst surrounded by fluid.

“[The consultant] told me I wasn’t fat all – I was actually quite thin.”

Ms Favell was referred to a high-risk obstetrics consultant and examined in February last year.

“By this time, even walking was a struggle and I had difficulty breathing.

“I’ll never forget the look of shock on his face when the consultant examined me. He said I had a large ovarian mass and the only option was surgery. He couldn’t say what it was, exactly, or how big.”

The cyst was finally removed in March last year, and was revealed to be the weight of a seven or eight-year-old child.

“They explained how big this cyst was and showed me the pictures – I couldn’t believe I’d been walking around for so long carrying this medical alien.

“It looked like a massive pile of ice cream so I called it Mr Whippy.”

Ms Favell has been left with a large scar and stretch marks, but will still be able to have children.

“I lost sight of how difficult even simple things like driving a car or walking up the stairs had become. Losing my lump gave me my life back – I can’t thank my surgeon enough.”