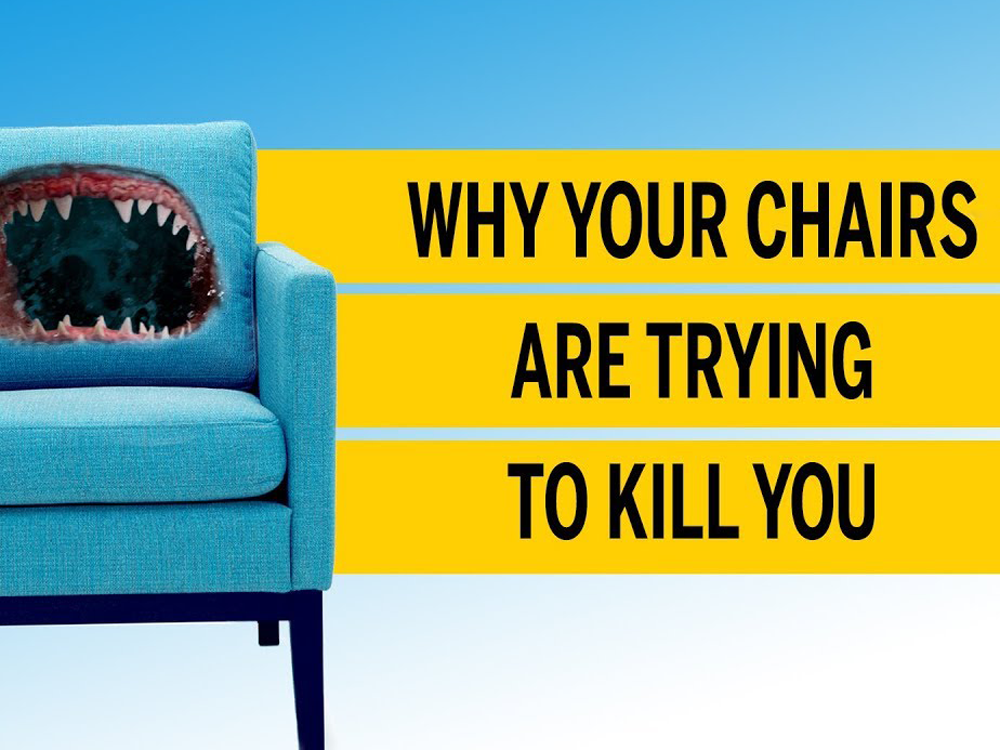 I have a bone-chilling message for all of you: Your chairs, all of them, are trying to kill you.

Yes, we all know that sitting is bad for you. But it doesn’t mean you have to be one of those putzes who spends their day at a standing desk. You just need to stop buying chairs designed to cripple your back.

Humanity didn’t used to have a problem with its chairs. For hundreds of years, we were perched on stools and wooden benches. When you sit on a stool, you’re doing something called “active sitting.” Yeah, you’re sitting down, but you’re tensing your core muscles and keeping your back straight. You can sit like this for decades and you’ll probably be fine.

A 19th century shoe cobbler spent his entire career sitting, and with good posture, he wouldn’t need a lick of pain medication in his old age.

But then, something happened to chairs. About 100 years ago, they started getting weird.

They’re pretty, they’re soft, but they’re horrific for your spine. For the last century, we’ve essentially been creating chairs that look great in a living room set, but that cripple anybody who actually tries to sit in them.

The reason is that these chairs curve your spine into a C. When you’re sitting properly, your spine is aligned like in one of those science class skeletons, each vertebrae perfectly balanced atop the other ones.

But when you’re jammed into a 20th century chair abomination, your spine is sickeningly curved, with uneven pressure on the various cartilage discs separating your vertebrae. That’s where lower back pain comes from: You spent decades slouching and burning out these discs and you’re suddenly in a world of pain.

The way to avoid this is to do away with all the big, plush furniture that is contorting your bones. If you’re sinking into your furniture, you’re on the slow boat to Exploded Back Town.

Find stuff with narrow seats so you can still sit with your feet on the floor, and with a backrest that actually supports your back, instead of sucking you in.

And if you can’t pony up for an orthopedic couch, just alter the way you sit. Sit perched on the edge like you’re a guest on a late night talk show. Basically, try and be like Napoleon. Sure, he betrayed the revolution, but damned if his throne didn’t give him great sitting posture.

Or, the other extreme, you recline completely. Lounge on your couch or kick back in a something that can lift your feet above your pelvis.

Browse a magazine or website dedicated to health and you’ll often hear that familiar commandment: take your supplements! And with good reason: minerals and vitamins play an important role in …
Canada has one of the highest prevalence rates of multiple sclerosis (MS) in the world. Each person experiences disease onset and progression in a different way.
It is one of the great successes of modern medicine that certain diseases, such as multiple sclerosis (MS), that once had no viable treatments now have a variety of therapies …
Multiple sclerosis (MS) is an unpredictable disease that can have a profound impact on a person’s ability to earn a living.
No visions, no wavering lights, no breathing wood. It’s less about being at one with all forms of life and more about just getting through the day
How can people brought back from death after cardiac arrest report having experienced lucid and vivid memories and recollections without a functioning brain? The study of near-death experiences is challenging …
It starts with lobsters. You have to understand about the lobsters
‘I can tell you in our own polling, it was like, shocking. I was even shocked,’ Kenney said